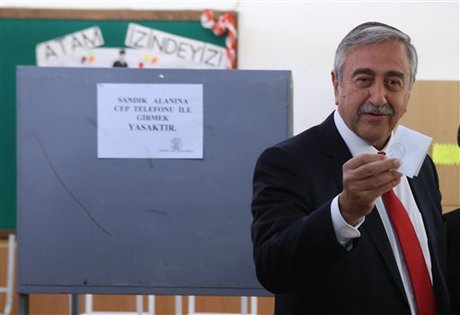 Turkish Cypriots voted in a new leader Sunday, with challenger Mustafa Akinci beating incumbent Dervis Eroglu in a run-off poll that could accelerate U.N.-backed efforts to reunify the long-divided island.

Akinci, a former mayor of Nicosia in the breakaway Turkish Republic of Northern Cyprus and vocal advocate of reconciliation with the internationally recognized government, had won 60.4 percent of votes with 678 of 693 ballot boxes counted, organizers said.

Celebrations began soon after results were announced at Akinci's office in north Nicosia, a few hundred meters (yards) from a U.N.-controlled buffer zone that separates the Turkish and Greek Cypriot sides of Europe's last divided capital.

Akinci told reporters after casting his ballot at a primary school in Nicosia: "When the time comes for real change, no power can stop it."

Voters streamed steadily into polling stations in Nicosia from early morning, many bringing their children along to share the experience.

Akinci will now be tasked with heading negotiations with the Republic of Cyprus aimed at reunifying the Mediterranean island after more than 40 years of division.

A U.N.-monitored ceasefire line has split the island since 1974 when Turkish troops occupied its northern third in response to an Athens-inspired coup seeking union with Greece.

The Turkish Cypriots, who had already pulled out of government institutions in the face of communal violence in 1963, declared their breakaway state in 1983.

But it is recognized only by Turkey, which provides around a third of its budget.

Voters said they hoped for a leader that would end Turkish Cypriots' international isolation.

"We are under stress. There are economic problems and respect for each other has decreased due to our indefinite (status)," said Nazife Kunt, 65.

Eroglu, in power since 2010, won the most votes in the first round, just over one percentage point ahead of Akinci and edging out the territory's first woman prime minister Sibel Siber.

But Akinci benefited Sunday from support from Siber's center-left Republican Turkish Party, and was seen by observers as the disputed territory's best hope to kickstart reconciliation with Cyprus.

He weathered an unedifying week of campaigning that saw Eroglu accuse Akinci of seeking to remove a giant TRNC flag from the mountains overlooking Nicosia and alleging that he is backed by the United States.

Akinci admitted there had been "unwanted developments" in the lead-up to polling day but thanked voters "who have tried their best for democracy."

Election organizers said they were investigating reports that about 50 ballot papers had gone missing from a polling station in Famagusta.

Turnout among the territory's roughly 176,000 registered voters was about 56 percent with an hour of polling remaining, organizers said.

U.N.-sponsored peace talks are set to resume after Sunday's election following a Greek Cypriot decision to end a six-month boycott.

Although a fresh dispute over Mediterranean oil and gas has soured relations between Turkish and Greek Cypriot authorities, both Ankara and Washington voiced hope last week that 2015 could finally be the year that Cyprus is reunited.

But voters were more circumspect about the prospects of the election leading to that long sought-after goal.

"If the new leader can deliver change, then good. He's welcome," said Ugur Barani, 48. "The people we elected in the past gave us hope then did nothing."