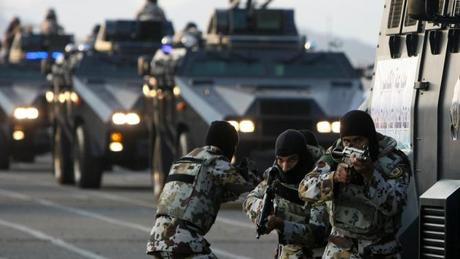 Saudi Arabia has arrested nearly 100 jihadists, mostly linked to the Islamic State group, and foiled several plots to carry out attacks including on the American embassy, authorities said Tuesday.

The arrests have taken place since December and most of those detained were Saudis, the interior ministry said in a statement published by the official news agency SPA.

It said two Syrians and a Saudi who had threatened to launch a suicide car attack against the American embassy in Riyadh last month were among those held.

The statement did not clarify if this group was linked to IS.

U.S. consular services in Saudi Arabia were suspended for a week in March over what was reported at the time as "heightened security concerns."

Saudi security services had proof that led to the "early uncovering of terrorist activities in several parts of the kingdom by members of the deviant group", a term the authorities use to refer to jihadists, the ministry statement said.

The Sunni-dominated kingdom is part of a U.S.-led coalition carrying out air strikes against IS in Syria and Iraq, where the jihadists have seized swathes of territory.

Among those arrested up to April 18 was a 65-strong IS-linked group plotting to target "residential areas, and operations to incite sectarian sedition" in attacks similar to the killing of seven members of the minority Shiite community in Eastern Province in November, the ministry said.

That group includes a Palestinian, a Syrian and two stateless people, it added.

They are accused of "recruiting young people", "spreading the terrorist ideology" of IS, sheltering wanted individuals, training recruits and "coordinating travel to conflict zones."

Another 15 Saudis formed a group linked to IS abroad, calling itself "Jund Bilad al-Haramain" or Soldiers of the Land of the Two Holy Mosques, in reference to Saudi Arabia being home to Islam's holiest sites, the ministry said.

It said that cell was led by a bomb-making "specialist" and was testing car bombs, planning to attack security headquarters, soldiers and residential areas.

Nine other Saudis, among them a woman, were arrested for allegedly promoting "terrorist organizations" on social networks and trying to "lure young people" to send them to conflict zones, among other activities.

They had threatened to bomb government headquarters and residential areas, and "used the woman in a failed attempt to lure a military official and assassinate him."

Two other Saudis were arrested separately.

One, held in the ultra-conservative Qassim region, has been linked to IS abroad and had "contacted them to form a terrorist cell."

The ministry said he confessed during questioning that had pledged allegiance to IS chief Abu Bakr al-Baghdadi.

The second of the two Saudis was also "affected by IS after he followed them on social networks," and has confessed to making arms.

Saudi "security forces will stand strongly and decisively against anyone who considers undermining the country's security and stability," the ministry said.

The ultra-conservative country is seeking to deter young Saudis from joining jihadist ranks.

Fighters from Saudi Arabia, Tunisia and Morocco make up the majority of about 12,000 foreign extremists who have traveled to Syria and Iraq, according to the London-based International Center for the Study of Radicalization.

News of the arrests came as Saudi security forces on Tuesday detained a second suspect in the fatal shooting of two policemen blamed on IS.

The policemen were killed in an April 8 drive-by shooting in an eastern district of Riyadh.

Authorities had said on Friday that they had seized three bomb-laden cars during investigations into the killings.

when the Saudis send them too Syria or Iraque ?

I suggest they send them to Porto.

"While Iran and Hezbollah & Ansaroullah are busy attacking Saudi Arabia while doing nothing against the Qaeda & ISIS terrorists."
.
lol what planet iu leave !!??

They must be all zionist/neonazy/wahabi tric..
If at least they would watch manar/sana they would know the truth...

i see sunni cleric defending the cut of the head of cristhianity in Levant!

Tric give it up man, you have a choice of two things esse, either learn to communicate in Arabic or English or drop the bong.

Your record is broken and keeps repeating the same message "all sunni's, druze, jews, bhuddist and Bolivian Mormons/Saudi's are the killers of Christians in the middle east. We got it and also believe that Iran will save the world from global warming as well as liberate the Maldives and yes off course Palestine in due course.