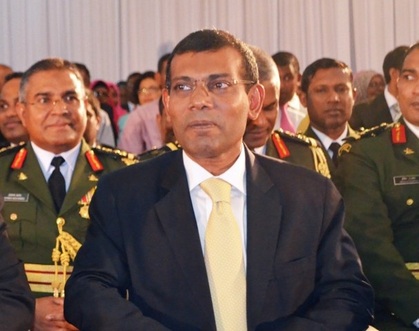 The United Nations Friday criticized the Maldives for jailing its former president after a "vastly unfair trail" as police in the honeymoon destination's capital teargassed protesters demanding his release.

The U.N. Human Rights Office said their delegation, which visited Male late last month, found that the country's first democratically elected leader had been subjected to a "rushed trial" under a system that was highly politicized.

"The trial of Mr. Nasheed was vastly unfair and his conviction was arbitrary and disproportionate," the U.N. rights body said in a statement issued from Geneva. He was convicted on a charge of ordering the arrest of an allegedly corrupt judge when he was in power in 2012.

It asked the government of President Abdulla Yameen, the half brother of former strongman Maumoon Abdul Gayoom, to ensure the safety of Nasheed and allow freedom of expression in the nation of 340,000 Sunni Muslims.

The Indian Ocean atoll nation's image as an upmarket tourist destination has been dented due to almost daily protests in the capital island Male, where Nasheed's supporters were staging another mass demonstration Friday.

Police fired teargas in addition to using pepper spray on protesters, and some hit back using plastic bottles and placards.

Witnesses said many among the thousands of protesters had been injured, while Nasheed's loyalists said several had been detained.

There was no immediate comment from the authorities who had earlier warned protesters not to breach police barricades.

Nasheed's wife, Laila Ali, made an impassioned appeal for his release during a visit to Washington Thursday to lobby U.S. officials and lawmakers and pressure the Maldivian government.

"This is a very difficult time for me and my children, but today I also have hope," Ali told reporters in Washington on Thursday.

Addressing the same meeting, Clooney described Nasheed as a "political prisoner" who was "wrongly convicted" at the conclusion of "a sham trial."

Clooney said: "In our filing, we ask the U.N. to rule that president Nasheed's detention is arbitrary and illegal under international law."

President Yameen has already asked foreign governments to respect the conviction of Nasheed, who was toppled in 2012 after what he called a coup.