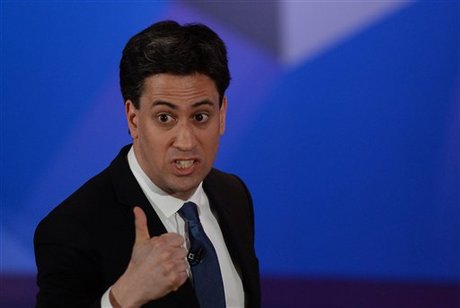 British opposition leader Ed Miliband was in Scotland Friday in a bid to stop support draining away from his Labor party to Scottish nationalists at next week's general election.

Miliband's rare campaign stop north of the border came a day after he ruled out a post-election deal with the pro-independence Scottish National Party (SNP), saying that he would prefer not to govern than to compromise with them.

Up to 30 protesters waited for Miliband outside the venue for his speech in Glasgow carrying Scottish flags and placards with anti-Labor slogans such as "Welcome To The Muppet Show."

SNP leader Nicola Sturgeon said Friday that Miliband's refusal to do a deal with her party was throwing away the chance to keep Prime Minister David Cameron's Conservatives, who are deeply unpopular in Scotland, out of power.

But Miliband said in his speech that, "for principled reasons", he would never team up "with a party that wants to break up the UK."

"I will never put the Tories (Conservatives) into government," he added. "But the tragedy is that the SNP may very well let the Tories in. That's what could happen if the Tories are the largest party."

Opinion polls suggest that neither Labor nor the Conservatives will win enough support to govern Britain alone after Thursday's election, meaning they will have to work with a smaller party or parties.

The SNP had offered to support a minority center-left Labor government to lock out the Conservatives.

While Miliband has ruled out a formal deal, he has not excluded working with the SNP on an informal, vote-by-vote basis.

Sturgeon said that ruling out a deal was proof that Labor had "lost the plot."

"I think people across Scotland, and I suspect across other parts of the UK, will be appalled," she added.

Miliband ruled out any post-election deal with the SNP in a television debate on Thursday in comments seen as an attempt to shore up support for Labor, which faces being almost wiped out by the SNP in Scotland.

Scotland was traditionally a Labor heartland but the SNP has been gaining in popularity since independence was rejected in a referendum last year.

Polls indicate it will win the overwhelming majority of the 59 seats in Scotland, up from six. An Ipsos MORI poll this week for Scottish Television indicated the SNP could win every single seat, with 54 percent of the vote.

The Conservatives have stepped up warnings during the election campaign that Labor would have to "dance to the tune" of the SNP if the two worked together.