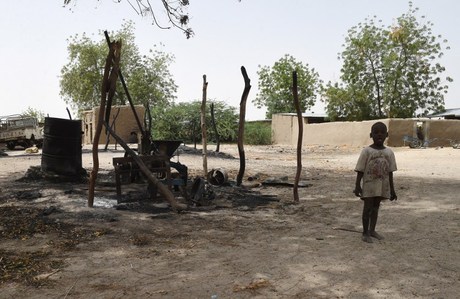 Around 25,000 Niger nationals who fled islands in Lake Chad over fears of attack from the Boko Haram jihadist group are living in "dramatic" conditions on the mainland, a U.N. source said Wednesday.

Citing security fears, Niger authorities last week urged residents of islands on the Niger side of the vast lake to evacuate by Monday.

"According to preliminary figures, 25,000 people have arrived in the towns of N'Guigmi and Bosso", near the shores of Lake Chad in southeast Niger, the U.N. Office for the Coordination of Humanitarian Affairs (OCHA) in Niger's capital Niamey said on its website.

"These people are there in the open. There are no tents and no shelter from a blazing sun and sandstorms. There are women and children without water," the source told AFP.

The call for Lake Chad residents to evacuate came a week after a cross-border assault by Nigerian-based Boko Haram insurgents on the island of Karamga that left at least 74 dead.

It was Niger's heaviest loss since it joined a regional offensive against the militants, whose six-year insurgency has claimed some 13,000 lives and displaced about 1.5 million people.

Niger had assured its citizens fleeing Lake Chad that measures would taken to ensure their resettlement.

On Tuesday, cereal was distributed in N'Guigmi, on the same day as Niger's Prime Minister Brigi Rafini visited the town -- host to some 12,000 evacuees.

Rafini said the islanders' situation on the mainland was "the lesser evil" faced with the threat from Boko Haram and promised them food and medication.