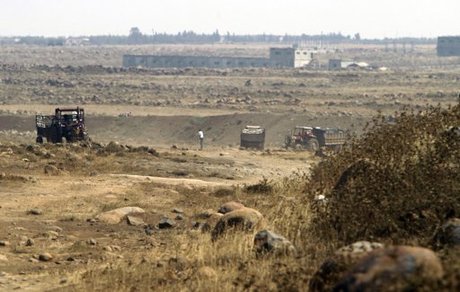 A Lebanese army patrol came under gunfire from Syria on Monday as it was inspecting landmines near the border with the neighboring country, Lebanon's National News Agency reported.

“It came under fire from the Syrian side of the border but no casualties were reported,” NNA said.

“The situation is calm at the moment,” it added.

Earlier in the day, the agency said “a metallic barrel and two plastic crates containing several landmines were discovered on the Lebanese bank of the Grand River in the outskirts of the Wadi Khaled border town of al-Hisheh.”

The landmines were “detonated on the spot by a military expert” as Military Police launched a probe into the incident, the statement added.

Ever since the Syrian conflict erupted in 2011, several border areas in the North and the East have come under cross-border gunfire and shelling.

The undemarcated Lebanese-Syrian border has facilitated the flow of gunmen to and from Syria.

cool landmines on the border with Syria??? wow

well it looks like the news that Da3esh was created by the syrian regime seems to get confirmed more each day!
the syrian regime and iran and hizbushaitan never fought da3esh, and da3esh has been attacking al nusra, which prompted al nusra to finish them up in qalamoun ahead of the battle with the syro/iranians.
day by day, we get to see clearer in this mess.

let us hope so :)
may they all kill each other and go to hell.

God help our poor LAF they get abused by all el msakeen!