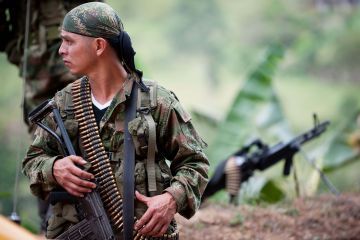 Colombia's smaller insurgency, the National Liberation Army (ELN), has met with members of the main rebel force FARC, in Cuba, with the blessing of President Juan Manuel Santos, who is hoping it will lead to a second peace process.

The goal of the discussion, Santos said Monday, was "to make progress in our drive to put an end to more than 50 years of armed conflict" that has pitted the Marxist FARC and leftist ELN against the government and right-wing paramilitaries.

Both the ELN and the FARC have been at war with the Colombian government since the mid-1960s.

The strife has left more than 200,000 people dead, and peace talks between the government and FARC have been on and off in Cuba's capital since November 2012.

But so far, it has not happened.

"Regarding a meeting of the top leaders of the FARC and ELN in Havana, I would like to say the following," the president said in a televised address.

"As head of state and head of government, I facilitated ... the conditions for this meeting to be able to take place," Santos explained.

There are about 2,500 fighters in ELN, Colombia's second largest rebel group after the FARC. Formed in 1964, the FARC has an estimated 8,000 fighters, deployed in rural areas of the country.