Shiite Militias Converge on Iraq's Ramadi after IS Takeover 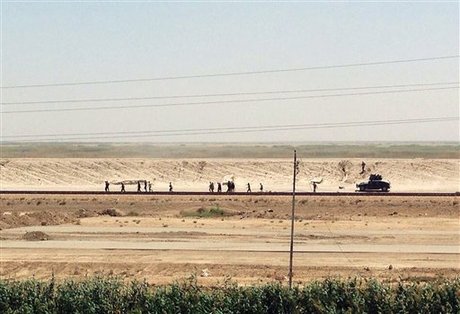 Shiite militias converged on Ramadi Monday to try to recapture it from jihadists who dealt the Iraqi government a stinging blow by overrunning the city in a deadly three-day blitz.

The loss of the capital of Iraq's largest province was Baghdad's worst military setback since it started clawing back territory from the Islamic State (IS) group late last year.

Washington, which had made Anbar -- of which Ramadi is the capital -- a cornerstone of its assistance to Baghdad against IS, admitted to a "setback."

Prime Minister Haider al-Abadi had been reluctant to deploy Shiite militias to Anbar province for fear of alienating its overwhelmingly Sunni Arab population.

He favored developing locally recruited forces, with support from the United States.

But militia commanders said Monday Ramadi's fall had shown the government could not do without the Popular Mobilization units (Hashed al-Shaabi).

Badr militia chief Hadi al-Ameri, a senior figure in the Hashed who has been critical of the government's policies in Anbar, went to Habbaniyah, near Ramadi, Monday to discuss operations.

With the huge numbers and battle experience of the paramilitary groups, a counter-offensive was expected to start soon, before IS has time to build up its defenses.

Abadi "ordered the setting up of new defense lines in Ramadi, to reorganize and deploy the fighting troops to face" the jihadists, his office said after he met Iran's visiting defense minister, Hossein Dehghan.

Various militias announced they had units already in Anbar -- including around Fallujah and Habbaniyah -- ready to close in on Ramadi.

A spokesman for Ketaeb Hezbollah, a leading Shiite paramilitary group, said it had units ready to join the Ramadi front from three directions.

"Tomorrow, God willing, these reinforcements will continue towards Anbar and Ramadi and the start of operations to cleanse the areas recently captured by Daesh will be announced," Jaafar al-Husseini told AFP, using an Arabic acronym for IS.

Asaib Ahl al-Haq, a group routinely accused of abuses, said it had more than 3,000 fighters waiting for a green light.

The fall of Ramadi, some 100 kilometers (60 miles) west of Baghdad, came when beleaguered security forces pulled out of their last bases on Sunday.

The jihadists used waves of suicide bomb attacks involving cars, trucks and bulldozers to thrust into government-controlled neighborhoods on Thursday and Friday.

The black IS flag was soon flying over the provincial headquarters and, with reinforcements slow to come, thousands of families fled.

Tensions between Tehran and Washington, Baghdad's two main foreign partners, also played out during the battle for executed dictator Saddam Hussein's hometown of Tikrit, which the government took back last month.

Hashed involvement was key in the recapture of Tikrit, but analysts had always warned Anbar would be a bigger task.

"Right now we're dealing with the Sunni heartland... where the Sunni community has not completely rejected IS," Ayham Kamel, director for the Middle East and North Africa at the Eurasia Group, said.

"It is not necessarily approval of IS, it could be fear or hedging, but they are not rising against IS," he said.

IS on Monday released a video of celebrations in Mosul, Iraq's second city and whose liberation from the jihadists now looks an ever more distant prospect.

In the Syrian half of the "caliphate" IS supremo Abu Bakr al-Baghdadi proclaimed last year, jihadist fighters nearly notched up another high-profile victory.

Government forces on Sunday repelled an IS advance on the ancient oasis town of Palmyra that had sparked concern that another jewel of the Middle East's architectural heritage could be destroyed by the jihadists.

"IS's attack was foiled," provincial governor Talal Barazi said Sunday after troops ousted the jihadists from the northern part of the town which they seized on Saturday.

But the jihadists remained on the outskirts and fired a barrage of rockets into the town late Sunday, killing at least five civilians including two children, the Syrian Observatory for Human Rights said.

Syrian antiquities director Mamoun Abdulkarim said two rockets struck the garden of Palmyra's museum but caused no damage to its priceless collection of statues, sarcophagi and other artifacts.

UNESCO has urged both sides to spare Palmyra, which it describes as one of the most important cultural centers of the ancient world.

On Monday, IS seized the Al-Hail and Arak gas fields northeast of Palmyra, vital to the regime for generating electricity for areas it controls, the Observatory said.

He is, loud and clear.