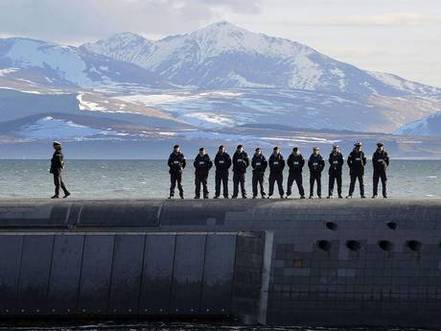 A junior British serviceman who published allegations of safety and security lapses around Britain's submarine-based nuclear missile defense system said Monday he would hand himself in and was expecting to be jailed.

Able Seaman William McNeilly claimed Britain's nuclear deterrent was a "disaster waiting to happen" and vulnerable to a terror attack.

The 25-year-old newly-qualified engineer went absent without leave last week and published an 18-page report on the Internet entitled "The Nuclear Secrets".

It alleged 30 safety and security flaws surrounding the submarines, which are based on the west coast of Scotland.

"I'm not hiding from arrest; I will be back in the UK in the next few days and I will hand myself in to the police," he told the BBC.

McNeilly said jail would be "such a nice reward for sacrificing everything to warn the public and government."

"Now I have no career, no money, no freedom, no chance of spending quality time with my family and friends. But I also have no regrets."

McNeilly claimed there were fire risks and leaks on board and that security checks were rarely conducted on personnel and contractors working on the submarines in dock.

He also alleged that alarms had been muted because they went off so often, missile safety procedures had been ignored and top secret information was left unguarded.

"It is just a matter of time before we're infiltrated by a psychopath or terrorist," he wrote.

"We are so close to a nuclear disaster it is shocking, and yet everybody is accepting the risk to the public."

The Royal Navy said many of McNeilly's claims were "subjective and unsubstantiated personal views, made by a very junior sailor, with which the naval service completely disagrees."

"The Royal Navy takes security and nuclear safety extremely seriously and we are fully investigating both the issue of the unauthorized release of this document and its contents.

"The naval service operates its submarine fleet under the most stringent safety regime and submarines do not go to sea unless they are completely safe to do so."

The current Trident system is reaching the end of its operational shelf life and debate about whether to renew it was one of the key topics in the British general election earlier this month.

Prime Minister David Cameron's Conservatives, which formed a majority government after the May 7 vote, are committed to replacing the four submarines "to provide the ultimate guarantee of our safety".