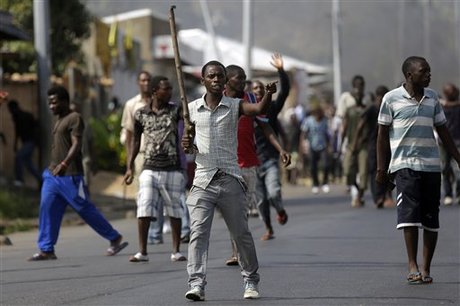 Fluttering flags displayed a black eagle and a machete, the symbol of Burundi's ruling party, as cheering supporters of President Pierre Nkurunziza celebrated the crushing of a coup.

On Wednesday, after three weeks of street protests against Nkurunziza's plan to run for a third term, a group of generals tried to oust him. The coup attempt failed and its ringleaders were arrested.

In a loyalist district of the capital Bujumbura, Nkurunziza's supporters sang and danced in celebration of the thwarting of the coup.

Thousands of party faithful gathered on Sunday, cheering and applauding at a political rally ahead of legislative elections that they insist will go ahead as planned next week, nevermind the turmoil in the country nor the anti-government demonstrations that doggedly persist.

Nkurunziza, a former rebel leader from the Hutu majority and a born-again Christian, believes he ascended to the presidency with divine backing.

"It is God who has defeated the coup," said one activist.

At the rally many supporters proudly wore party T-shirts with the simple slogan "Yes", in support of Nkurunziza's third term, in a presidential election due on June 26.

Over 100,000 Burundians have fled the country as refugees fearing further violence, but government supporters were upbeat.

"Coups are not possible, democracy is already complete in Burundi," declared music blaring from speakers, in the Kirundi language. "You can fool foreigners, but we Burundians cannot be fooled."

In Kamege, a poor neighborhood of Bujumbura, people are heartland supporters of the CNDD-FDD, former Hutu rebels from the 13-year civil war that devastated the central African country from 1993-2006.

"Long live CNDD-FDD!" leaders shout out to the crowd, who chorused back.

The coup attempt raised fears of a return to widespread violence in the impoverished country, which is still recovering from the war that left hundreds of thousands dead.

In the crowd, Jean-Pierre -- who did not want to give his full name -- said he came, "Because I love all the development the president has done."

Many are members of the Imbonerakure, a fearsome group whose name means "The Watchmen" or, literally, "Those Who See Far".

The Imbonerakure is the ruling party's youth wing, accused by the United Nations of being a violent militia, and of intimidating, beating and even killing opponents of the government.

In February, Human Rights Watch accused security forces and the Imbonerakure of together executing at least 47 rebel fighters who had surrendered.

At the rally, young men proudly displayed their membership of the youth league on their shirts.

"All young people are Imbonerakure, they are not criminals," one speaker said.