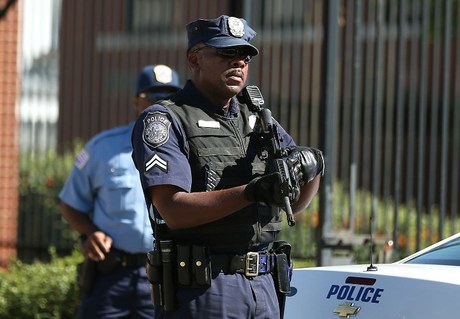 After controversy over the policing of high-profile protests in Baltimore, Maryland and Ferguson, Missouri, the White House said Monday that Obama will limit police access to military equipment.

"At times, the law enforcement response to those protests was characterized as a 'military-style' operation," said a 50-page report that will form the basis of Obama's announcement later Monday.

The protests were prompted by the killing of unarmed black men by police.

According to US law, the use of deadly force by police is only justifiable if a suspect poses a credible threat to the officer or the public.

Obama is in Camden, New Jersey, which once had one of the country's highest violent crime rates.

There, he is expected to champion community policing as an alternative to heavy handed law enforcement.

Obama has repeatedly sought to highlight the underlying causes of social unrest as riots have shaken several major cities.

"A sense of unfairness and powerlessness has helped to fuel the kind of unrest that we've seen in places like Baltimore, Ferguson, and New York," Obama said in his weekly address.

"It has many causes -- from a basic lack of opportunity to groups feeling unfairly targeted by police –- which means there’s no single solution."

"But there are many that could make a difference and could help. And we have to do everything in our power to make this country’s promise real for everyone willing to work for it."

The White House said it hopes the new measures will strengthen "all-important trust between the law enforcement officers who put their lives on the line every day, and the communities they have sworn to serve and protect."

The recommendations include barring the purchase of some military uniforms, firearms of .50 caliber or greater, grenade launchers and bayonets.

Police will still be allowed under certain circumstances to use wheeled armored vehicles, Humvees, drones and riot batons.

Many of the recommendations have long been advocated by civil liberties groups, which say billions of dollars' worth of military equipment is transferred from the federal government to police departments every year.

In March, Obama received a comprehensive package of measures following a string of alleged abuses

He was told that U.S. police shootings should be reported to the federal government and subject to independent investigation.