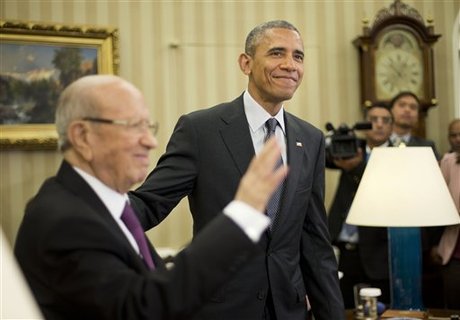 U.S. President Barack Obama offered Tunisia closer security ties Thursday, in a bid to ensure jihadists do not extinguish the brightest democratic light to emerge from the Arab Spring.

Hosting President Beji Caid Essebsi at the White House, Obama declared Tunisia a "non-NATO ally," which would allow for enhanced military cooperation and the transfer of advanced weapons.

"I want the president and the people of Tunisia to know that the United States believes in Tunisia," Obama said in the Oval Office.

The U.S. president is hoping to strengthen Essebsi who in December became the first democratically elected leader in Tunisia's 60-year history.

Tunisia became the flashpoint of popular revolts across the Middle East in 2011 when a desperately disaffected fruit vendor set himself alight, arousing pent-up anger at failing government and economic hardship.

Since then the North African country has held elections, but also faces rising security threats, including chaos in neighboring Libya and a March attack on the Bardo National Museum that killed 21 tourists.

Tunisia has not always been high on Washington's list of priorities and Thursday's monetary commitment still pales in comparison to aid to other countries in the region.

Obama restated his previous pledge to ask Congress to approve $138 million in assistance for Tunisia next year, which includes $62.5 million in military financing.

Egypt -- a much larger country that is home to the Suez Canal -- receives $1.3 billion.

Ahead of the meeting, a bipartisan group of senators had written to Obama, urging him to be bold in supporting Tunisia's democratic transition.

"Many members believe that Tunisia's success is as much a national security priority as U.S. relationships with Israel or Jordan," a Senate aide said, asking not to be named.

Aside from the symbolic value of supporting an Arab democracy, Tunisia also has broader strategic significance, according to Sarah Feuer, a North Africa expert at the Washington Institute.

"A failed Tunisian state would only embolden religious extremists across the region," she said.

"Policymakers should not underestimate the implications of such a development, especially given the dangerous tumult that extremist actors are already causing throughout the Middle East and North Africa."

With Tunisian youth unemployment running at over 30 percent and the key tourism sector rocked by attacks, the White House also announced measures to boost the economy.

It floated the prospect of a new $500 million loan guarantee in support of reforms.