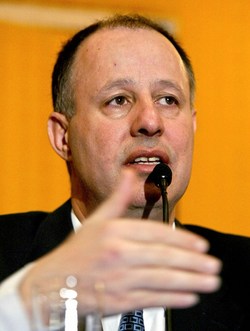 Tzahi Hanegbi, chairman of the influential foreign affairs and defense committee in parliament, was responding to remarks by U.S. President Barack Obama published Thursday in news magazine The Atlantic.

Obama restated concerns about comments that Netanyahu made during a hotly-contested March general election and warned of repercussions.

In a polling-day bid to energize rightwing voters, he warned that Arab Israelis were going to the polls "in droves" -- a comment for which he later apologized.

"It appeared that Arab Israeli citizens were somehow portrayed as an invading force that might vote, and that this should be guarded against," Obama said.

Obama also pointed to a Netanyahu statement ruling out the establishment of a Palestinian state if reelected, though he has since sought to backtrack.

"I think his approach has no justification and no small measure of hypocrisy," he told Israeli public radio.

"We don't hear a word of criticism about our neighbors, for example the world record-holder in executions, Iran, with whom he is actually making supreme attempts at reconciliation," he said, referring to efforts to strike a nuclear deal.