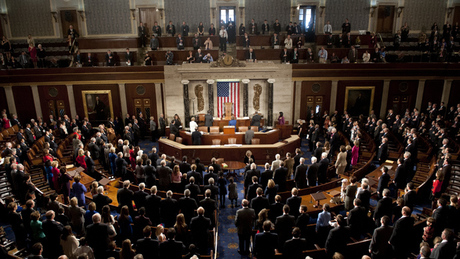 The House of Representatives passed the measure overwhelmingly last week, with Democrats and Republicans uniting in their desire to rein in the National Security Agency's highly controversial program that scoops up data from millions of Americans with no connection to terrorism.

But it got hung up in the Senate, where it fell three votes shy of the 60 necessary to advance in the chamber.

The Senate immediately turned to consideration of a two-month extension that would temporarily reauthorize the telephone data dragnet and other parts of the USA Patriot Act which are set to expire June 1 without congressional action.

But that bill failed to reach the 60-vote threshold as well.

In addition to the telephone metadata collection, provisions authorizing roving wiretaps and lone-wolf tracking are also set to expire when the clock strikes midnight at the end of May.

With lawmakers scrambling for a solution in the dead of night before the Senate goes on a scheduled one-week break, the White House on Friday drove home the very real prospect that national security operations could lapse on June 1.

"There is no plan B," acknowledged White House spokesman Joshua Earnest to reporters.