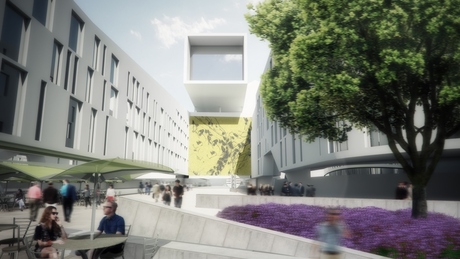 U.S. Ambassador to Lebanon David Hale announced on Wednesday plans to build a new embassy, which he said will give the mission more space to deepen ties between the two countries.

The new facilities, which will be located next door to the current embassy in the town of Awkar, “is just one more example of the enduring partnership that exists between the United States and Lebanon,” said Hale following talks with Ambassador Charbel Wehbe at the Foreign Ministry.

“The new embassy will give us more space to advance our common interests and reflect the growing and deepening ties between our two countries,” he stated.

“It will leave no doubt about the continued American commitment to and investment in Lebanon,” the ambassador said.

“America is here to stay, to work with the Lebanese people for a secure, stable, prosperous, sovereign, and free Lebanon,” he added.

According to Hale, the new project represents a nearly $1 billion dollar investment by the U.S. government in the partnership between Washington and Beirut.

“The new embassy will be a sustainable and eco-friendly facility for American diplomacy in Lebanon,” he said.

This means the mission “will reduce its environmental impact while enhancing the space around it,” the diplomat added.

I guess and I am hopeful Mr. Berry does not get involved with the "cut" that this would translate into quite a bit of work for Lebanese Architects and Contractors as well as labor (hopefully not all Syrians..)

I would rather have the US embassy on our soil than Syria's or Iran's where I see no queues forming there either.

The bigger the embassy the better ties between both countries

They probably want to expand the CIA station to monitor all the crap happening in the Middle East.

If you want better ties Mr Hale tell your pals over the border to stop violating Lebanese airspace and threatening war on us building bigger embassies doesn't give you better ties better diplomacy gives better ties.

Without any hesitation I concur with you Ayatollah A.