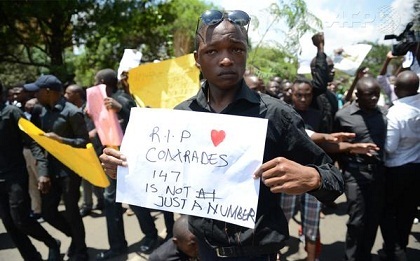 Five men arrested in connection with the Garissa university massacre in April were charged in a Kenyan court on Thursday with terrorism, officials said.

The charge sheet read out to the suspects stated that they conspired to commit a terrorist act on April 2nd, on the day 148 people -- most of them students -- were killed at the college.

It was not immediately clear what role the men played in the attack, which Kenyan officials said was carried out by just four gunmen, all of them Kenyan nationals, who were all killed.

"On or before the 2nd April at Garissa township within Garissa county, jointly with Abdirahim Mohamed Abdulahi (deceased), Khalid Issack Hassan (deceased) and other persons not before court," the accused "conspired to commit a terrorist act in the college," judge Daniel Ogembo said, reading from the charge sheet.

The names of the 148 killed were all read out in court, and the five suspects were each charged with a total of 162 counts of terrorism.

The accused -- Mohamed Ali Abdikar, Hassan Aden Hassan, Sahal Diriye and Osman Abdi who are thought to be Kenyan or Somali nationals, and Rashid Charles, a Tanzanian national -- denied the charges and were remanded in custody until June 11 when the court will rule on bail.

The prosecution has said it intends to call more than 30 witnesses to testify in the case, and the trial is scheduled to begin in earnest on August 24.

After the attack, officials announced five arrests, including three alleged "coordinators" captured as they fled towards Somalia and two others seized at the university compound.

The two arrested on campus included a security guard and a Tanzanian found "hiding in the ceiling" and holding grenades.

During the pre-dawn university attack, the extremists lined up non-Muslim students for execution in what President Uhuru Kenyatta described as "barbaric medieval slaughter".

The massacre, Kenya's deadliest attack since the 1998 bombing of the U.S. embassy in Nairobi, claimed the lives of 142 students, three police officers and three soldiers.

The Shebab fled their power base in Somalia's capital Mogadishu in 2011, and continue to battle the AU force, AMISOM, sent to drive them out.

The group has carried out a string of revenge attacks in neighboring countries, notably Kenya and Uganda, in response to their participation in the AU force.

Shebab fighters also carried out the Westgate shopping mall attack in Nairobi in September 2013, a four-day siege which left at least 67 people dead.

Why did Shebab flee their power base in Mogadishu in 2011? Was it connected with the Ethiopian invasion of Somalia at that time?