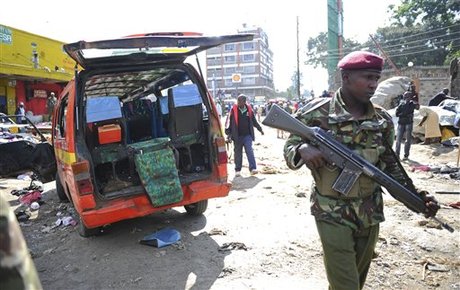 Officials and residents said the attackers were believed to have been seeking to kill a local administrator, who lives close to the scene of the attack and is known to be on a Shebab "wanted" list for speaking out against the Islamists' activities in the region.

"The attackers were possibly heading to the chief's residence, but since they were not familiar with the house, they started shooting people indiscriminately," said Ahmed Muhamed, an elder in Wajir.

Wajir, situated 490 kilometers (310 miles) northeast of the Kenyan capital Nairobi, is part of a vast border area -- including Mandera county to the north and Garissa county to the south -- to have been hit by an upsurge of attacks by the Somali-led and al-Qaida-linked Shebab rebels.

Last year, the Shebab carried out a string of massacres in Mandera, and in April attacked a university in Garissa, killing 148 people -- most of them students.

The Islamists have vowed to continue attacks until Kenya pulls its soldiers out of Somalia, where they are part of an African Union mission trying to rout the insurgents and protect the internationally-backed government in Mogadishu.

However there are increasing fears that the Shebab are steadily building their support network in the lawless, impoverished and Muslim-majority border region, and shifting the bulk of their activities from Somalia to Kenya.