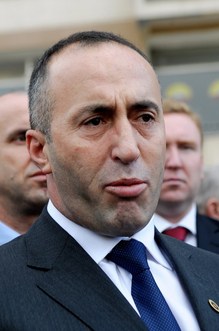 The resolution said Kosovo's government and president "urgently require the Slovenian authorities to immediately return (his) diplomatic passport and unconditionally allow the return" of Ramush Haradinaj to Kosovo.

Haradinaj, acquitted by a U.N. court of war crimes during the 1990s Kosovo conflict, was detained Wednesday at Ljubljana airport and sent before a Slovenian court which decided to seize his passport until a final decision is reached over the warrant.

Haradinaj was set free, but was not allowed to leave Slovenia pending the decision expected later on Thursday.

The 46-year-old, currently an MP and head of an opposition party, was returning from Germany and was waiting for a flight to Pristina at the airport in the Slovenian capital.

Haradinaj was named Kosovo prime minister in 2004 but resigned after only 100 days as he was indicted by the U.N. war crimes tribunal. In 2012, The Hague-based court cleared him of charges of committing war crimes against Serb civilians during the 1998-1999 war in Kosovo.

Serbian state-run RTS television reported earlier that the warrant for Haradinaj, a former commander of the Kosovo Liberation Army (KLA) -- a pro-independence ethnic Albanian rebel movement -- was issued in 2006. It did not provide any other detail.

During the 1998-1999 war KLA guerrillas fought the armed forces of then Serbian strongman Slobodan Milosevic.

The war ended when a NATO-led air campaign halted Milosevic's crackdown on the pro-independence Kosovo Albanians and ousted his forces from the territory in June 1999.

Kosovo unilaterally proclaimed independence in 2008, a move that Belgrade still refuses to recognize.