Poll: Majority of Lebanese Don't Support U.S. but Back its Fight against IS 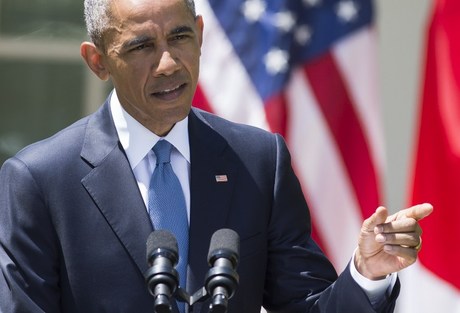 Countries across the world have a favorable view of the U.S. while 60 percent of Lebanese express an unfavorable view, according to a Pew Research Center report.

The U.S. airstrikes in Iraq and Syria against Islamic State group fighters also drew 62 percent support worldwide. Among the supporters are 78 percent of the Lebanese population.

But the U.S. scored less favorably when people were questioned about what Pew called "the harsh interrogation methods used against suspected terrorists in the wake of 9/11 that many consider torture.”

Fifty percent of Lebanese said the methods were unjustified, compared to 58 percent of respondents in the U.S. who felt the acts were warranted.

Pew said Tuesday that although many around the world take a grim view of the harsh interrogation policy America pursued in the wake of the September 11 attacks, the U.S. continues to receive strong marks for respecting the individual liberties of its own citizens.

The survey said 81 percent of Lebanese believe that the U.S. respects the personal freedoms of its people, but only 36 percent said they have confidence in U.S. President Barack Obama's ability to do the right thing regarding world affairs.

People in 40 countries were included in the study.

Fifty percent of Lebanese said the methods were unjustified, compared to 58 percent of respondents in the U.S. who felt the acts were warranted.

Ofcourse majority Lebanese are against the U.S, the rest are just pro zionists.

Give it a rest Mystic will you? No one queues more at the US embassy than you guys and why? When we had a temporary peace with Israel, no one more than you guys were crossing to Israel to buy farm fish and other consumer items to sell back by the airport road. No one more than you guys applied for temporary vehicle number plates given by the Israelis, to go to Israel and buy all sorts of things. Why did you guys literally gobble up all that land leading to the Israeli border? Now don't tell me like did Mowaten that I am saying stories, because I know several Shiites who bought land because they felt it was good investment, especially when the peace will come. Now give it a rest because we all know.

There will not be peace in Lebanon phoenix. We have Israel, ISIS and Al Qaeda next door and you mention "peace" ya zalame.

Only American lovers are you people Phoenix, you are also not the majority according to Naharnet here.

Phoenix I thought you were the glorious majority anti Hezb Lebanese. Seems like the majority are actually against your kind and your beloved America my friend.

Then this poll is not so complete: Most Lebanese are pro-US, maybe not everyone trusts US policy, watch the word TRUST everyone, but most love the US. Wlak ya 3ammeh look at how the Lebanese love US products, cars, food, clothe, movies,hence and so forth. Wlak if the US dropped down its restrictions on immigration to the US, they'd be no one left in Lebanon, Mystic, Mowaten, Southern and their people first in line to leave, shou hal 7akeh? If only the US stood by us a lot more, supplied our army without so many barriers, but all the same, let the US just for a day say it's free and see the queues will reach Al Dahieh and beyond. Bala maze7 ya shabeb, we all know.

Phoenix atleast Gemayel admitted his alliances and Support for the U.S agendas, while you try to hide it in shame.

"60 percent of Lebanese express an unfavorable view (of the US)" according to the poll, but who cares about polls, only phoenix knows, from his armchair he has access to all the stories and numbers that nobody else in the world has.

"Wlak if the US dropped down its restrictions on immigration to the US, they'd be no one left in Lebanon, Mystic, Mowaten, Southern and their people first in line to leave"
Piss off phoenix, seriously. You have no idea and talking about us like you can decide for people what they want. I could have had US citizenship years ago if I wanted but declined, and will never set foot in their country as long as their foreign policy is one of terror and oppression.

"I could have had US citizenship years ago if I wanted but declined, and will never set foot in their country as long as their foreign policy is one of terror and oppression."

the mouthpiece prefers to hold on to his iranian farsi citizenship. Imagine he was offered the U.S citizenship (while sitting in dahyeh) on a plate but he "declined"...... hahahahaha! Maskeen;))))

the most ridiculous thing I have ever heard..... you declined the U.S citizenship?? First, you had to live in the United States for a certain amount of time and then you have to apply. You don't have the privilege to decline because the citizenship is not offered. What a professional liar!

I see you bums are choking on this one, must be very disturbing for your preconceived ideas :) Whether you like it or not it is a fact, I don't need or care about you believing it, after all you're just a bunch of internet trolls.

I can tell you _mowaten that you would not have received the "green" card automatically. If you were an asylum seeker, there is still an extensive wait time after applying. The only way your would receive a visa is if you were a political refugee and then there is still a short wait. Know your facts before you spew lies. By the way, we don't want you here anymore than you want to be here. Most Americans have faith and loyalty to our country and not foreign regimes.

And here again, making stupid assumptions and giving lessons about "knowing your facts", hilarious to see you make a fool out of yourself like this. I have nothing to prove to you trolls, especially when it's regarding personal matters but since you look like you're going to lose sleep over it, it was through marriage that I could have obtained it. And again: i'm not interested, and you can keep your "faith and loyalty" to the world's most oppressive and murderous regime.

oh i see, so hundreds of cute Californian girls were lining up to marry you but you declined. All is clear now... LOL