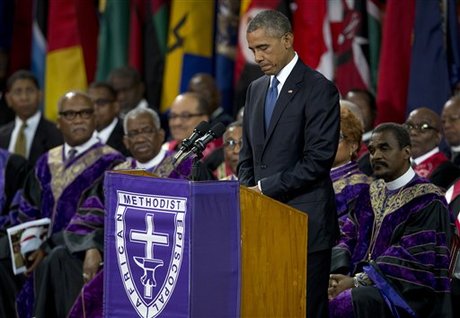 U.S. President Barack Obama made a fresh pitch for tighter gun controls Friday as he eulogized the pastor killed in the Charleston church shootings, saying Americans had ignored the toll of gun violence for too long.

"We've been blind to the unique mayhem that gun violence inflicts upon this nation," Obama said at the funeral in the South Carolina city.

"The vast majority of Americans, the majority of gun owners, want to do something about this."

Obama gave a rousing speech in front of thousands of mourners who came to pay their last respects to Reverend Clementa Pinckney, who was one of the nine people gunned down last week during a Bible study class at the Emanuel AME Church.

The alleged gunman, 21-year-old Dylann Roof, has been charged with nine counts of murder and a related weapons charge. He is in custody in a South Carolina jail.

Obama referred to other mass shootings that have shocked America -- the Newtown school massacre in 2012, the killings in a Colorado theater earlier that same year -- and acknowledged that more gun controls could not prevent all tragedies.

But, as he has since the June 17 killings in Charleston, the president urged the nation to reflect and take action.

"Whatever solutions we find will necessarily be incomplete. But it would be a betrayal of everything Reverend Pinckney stood for, I believe, if we allowed ourselves to slip into a comfortable silence again," he said.

Obama also waded into the thorny debate about the future of the Confederate flag, a symbol embraced by Roof in an online manifesto espousing white supremacy.

"For too long, we were blind to the pain that the Confederate flag stirred in too many of our citizens," he said.

"As we all have to acknowledge the flag has always represented more than just ancestral pride. For many, black and white, that flag was a reminder of systemic oppression. And we see that now."

He said removing the Stars and Bars from the grounds of the South Carolina State House would not be "an insult to the valor of Confederate soldiers."

"It would simply be an acknowledgement that the cause for which they fought, the cause of slavery, was wrong," he said.