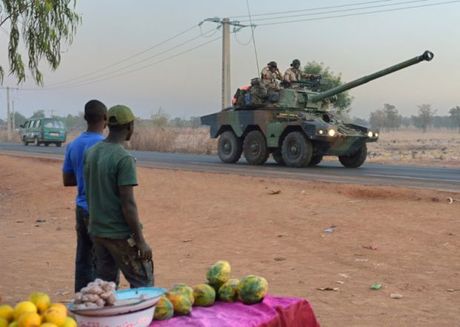 Mali's government appealed for calm on Monday after jihadists ransacked a town near the Ivory Coast border in the second attack in the south in less than three weeks.

Fighters carrying an Islamist flag took control of part of the town of Fakola on Sunday, attacking security forces and damaging a number of public buildings, including the town hall and police station, according to locals.

A government statement posted on Facebook on Monday said the army had been deployed to the area to hunt down the jihadists, who escaped after ending their brief occupation.

"The government of the republic of Mali strongly condemns these barbaric attacks aimed at sabotaging the actions for peace and stability in Mali," it said.

"The government... asks the population to remain calm and cooperate with the defence and security forces in their fight against terrorism."

Despite the recent signing of a peace accord between the government and a coalition of rebel groups, Mali remains deeply divided among rival armed factions and is battling an ongoing Islamist insurgency.

A local politician and residents said the attackers, who chanted verses from the Koran, were members of the jihadist militia Ansar Dine, which normally operates in Mali's northern desert.

Incursions in the south remain extremely rare, although the group was said to have been behind an ambush less than three weeks ago in the nearby town of Misseni, when jihadists killed a policeman and hoisted their flag at a military base. No deaths were reported in Sunday's attack.

Ansar Dine took control of northern Mali in 2012 alongside other jihadist factions linked to Al-Qaida, before being ousted by a French-led international military intervention.