U.N. Envoy to Brief Security Council on War in Syria 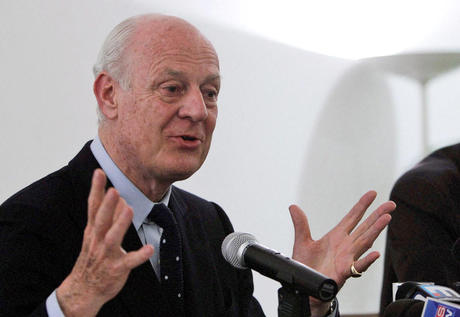 A U.N. envoy who has spent two months meeting with key players in Syria will address the Security Council next week to make recommendations for ending the war.

The envoy will "discuss what his recommendations are on the way forward in terms of what he has learned as a result of his consultations," said Haq.

After his plan for a freeze in fighting in the city of Aleppo failed, De Mistura on May 5 launched a series of consultations with various parties and regional players including Iran to try to kickstart a political process.

There have been no peace talks on Syria since the so-called Geneva II meetings in early 2014 ended in failure.

News of the envoy's return to New York for the key meetings came as U.N. Secretary-General Ban Ki-moon issued a statement appealing for action to end the war, now in its fifth year.

Ban noted that the parties to the conflict had signed on the first Geneva plan three years ago and that despite this step "the suffering of the Syria people continues to plumb new depths."

"It is time to find an exit from this madness," said Ban.

More than 220,000 people have died in the conflict and almost half of the country's population has been driven from their homes.

The Security Council has been divided over Syria, with Russia, a key ally of the Damascus regime, blocking resolutions aimed at putting pressure on President Bashar Assad to end the war.

De Mistura, an Italian-Swedish diplomat, was appointed in July to take over what many termed a "mission impossible" to bring peace to Syria, after two top-notch diplomats,  Kofi Annan and Lakhdar Brahimi, resigned after failing at the same task.

The envoy traveled to Damascus in mid-June for talks with Assad, and the Syrian state news agency reported that the two men had agreed to continue efforts to find a political solution.