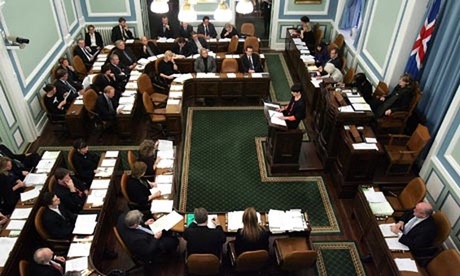 Iceland's parliament on Friday voted widely in favor of decriminalizing blasphemy, in the name of freedom of expression in the wake of the Charlie Hebdo attacks in Paris.

The bill was adopted after 43 of 63 members of parliament voted in favor. One lawmaker voted against, 16 were absent and three abstained.

The bill had been put forward by the Pirate Party in February, after the January attacks in which 12 people were gunned down in the Paris offices of French satirical magazine Charlie Hebdo.

"Freedom of expression is one of the cornerstones of democracy. It is a fundamental point in a free society that people can express themselves without fear of punishment of any kind, whether on behalf of the authorities or others," the Pirate Party said in presenting its bill.

Article 125 in Iceland's penal law, which has now been abolished, had stipulated that anyone "who publicly mocks or dishonors the doctrine or worship of a legal religious group, in this country, shall be fined or jailed up to three months."

The Pirate Party hailed Friday's vote, saying on their website: "The Icelandic parliament has issued the important message that freedom will not bow to bloody attacks."

The Lutheran Church of Iceland, to which almost 75 percent of Icelanders belong, had supported the change.

The Pirate Party won three of the 63 seats in Iceland's parliament in 2013 and is currently the most popular party in the country, with recent polls crediting them with more than 30 percent of voter sympathies.