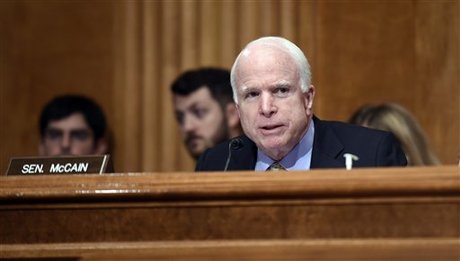 Influential Senator John McCain said Saturday the complete withdrawal of U.S. troops from Afghanistan by the end of 2016 would be a "serious mistake", as stretched local forces battle a resurgent Taliban.

"I think the most serious mistake the U.S. could make... would be to have a calendar-based withdrawal," McCain told a press conference at the NATO headquarters in Kabul.

"That would be a tragedy and in my view an opening for the Taliban to gain great success in Afghanistan," the chairman of the powerful U.S. Senate Committee on Armed Services added.

July 4 marks U.S. Independence Day, and McCain used the visit to meet soldiers stationed in the Afghan capital, while paying tribute to the 2,200 U.S. troops killed there since the 2001 invasion.

U.S. President Barack Obama has backpedalled on plans to shrink the U.S. force in Afghanistan this year by nearly half, agreeing to keep the current level of 9,800 U.S. troops until the end of 2015.

The U.S. troops are mainly involved in training their Afghan counterparts, and make up the bulk of the 12,500-strong foreign corps.

President Ashraf Ghani thanked the United States for its support after meeting with McCain, in a statement released by the presidency.

But the current U.S. administration would like to see a total exit for its personnel over the next 15 months, a decision McCain said required a "reassessment".

The Republican senator added that the current security situation pointed to the need for "additional U.S. capabilities" as Afghan forces incurred significant casualties with major cities under threat.

Fighting on multiple fronts and facing record casualties, Afghan forces totaling 350,000 are struggling to rein in the militants even as the government makes repeated efforts to jump-start peace negotiations.

Bolstered by battle-hardened Central Asian fighters in their ranks, they recently captured the district headquarters of Chardarah, adjoining Kunduz city, triggering fears the militants would overrun their first provincial capital since 2001.

The militants also launched a brazen assault on the Afghan parliament in late June.

And in a sign of the political malaise the government is facing in its attempts to improve the country's security situation, Afghanistan's parliament on Saturday rejected Ghani's nominee for defense minister for the second time.

The crucial post has sat vacant for months, reportedly due to differences between Ghani and his chief executive and former presidential election rival, Abdullah Abdullah.