Pope Expected to Draw more than a Million at Ecuador Mass 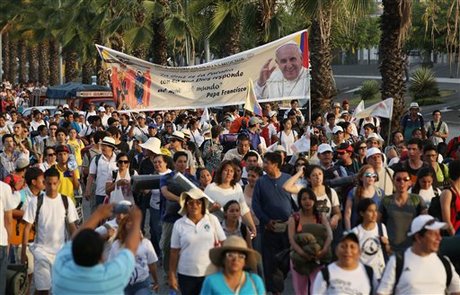 More than a million faithful -- some of whom traveled for hours and spent the night outdoors -- gathered Monday for the first open-air mass of Pope Francis's three-nation trip to South America.

Keeping vigil in tents, sleeping bags and on cardboard, tens of thousands hoping to catch a glimpse of the pontiff spent the night in the rough ahead of the service in Guayaquil, Ecuador's largest city.

Francis -- the first pope from Latin America -- will say mass in front of as many as 1.5 million in a park on the second day of his trip to the region, which will also include stops in Bolivia and Paraguay.

The 78-year-old Argentine-born pontiff arrived in Ecuador on Sunday and quickly made clear that the plight of the continent's myriad poor would be a dominant theme of his tour.

"Progress and development must ensure a better future for all, paying special attention to our most vulnerable brothers and the most vulnerable minorities, which are the debt that Latin America still has," Francis said.

It is the first visit by a pontiff to Ecuador in three decades.

A similar number of worshipers is expected for the pope's second Ecuadoran mass on Tuesday in Bicentennial Park in the capital Quito.

Rosa Elena Lata, an 82-year-old, traveled 16 hours from southern Ecuador to attempt what she called the "heavenly miracle" of seeing the pope.

"I want to see him because seeing him will be like seeing Jesus," she told AFP Sunday, while readying to spend the night in the heat and humidity of Guayaquil, Ecuador's main port.

Francis, the first Jesuit pope, will visit the Shrine of the Divine Mercy on the outskirts of town before arriving at Los Samanes in his popemobile.

After the mass, he will have lunch with fellow Jesuits, among others, before returning to Quito for a meeting with President Rafael Correa and a visit to the Metropolitan Cathedral, in the historic heart of the capital.

Among those with whom the pope will lunch is Francisco Cortes, a fellow Jesuit whom Francis last saw 30 years ago.

"For me it is an act of humility by this man, to remember a person... without any merit, who is nothing special. He insisted he wants to see me," Cortes, who is in his 90s, told AFP.

The papal visit coincides with a time of political tension in Ecuador, with Correa facing growing calls to leave in some of the biggest anti-government demonstrations to shake the country in recent years.

Francis, who regularly wades into political issues, urged Correa to promote "dialogue and participation without exclusions."

The pope's last visit to South America was a triumphant trip to Brazil in 2013 that culminated with three million people gathering along Copacabana beach in Rio de Janeiro for a mass at the end of a Catholic youth festival.

Many of the world's 1.2 billion Catholics hail from Latin America, despite the rising popularity of evangelical beliefs and practices in recent years.

During the trip, Francis is due to deliver no fewer than 22 speeches and catch seven flights covering a total of 24,000 kilometers (15,000 miles).

All three of the countries he is visiting are predominantly Catholic and have been marked by a long history of poverty and inequality mostly afflicting indigenous populations.

Since he was chosen as pope in March 2013, Francis has become an outspoken advocate for the poor and on social and environmental issues.

It is his ninth trip abroad but only the second visit to Ecuador by a pope. John Paul II traveled to the country in 1985.

Then, about 94 percent of the population was considered Catholic, compared to 80 percent today in the country of 16 million.

The decrease has come as evangelical churches have attracted huge numbers of followers, many of whom are indigenous people disenchanted by a lack of attention from the Catholic hierarchy.

The pope's visit will see him leave for Bolivia on Wednesday. He goes to Paraguay on Friday, before heading home to the Vatican on July 12.