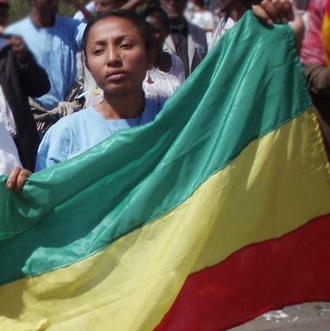 Five bloggers and journalists held in Ethiopia for more than a year have been freed after the charges were dropped, their lawyer said Thursday, weeks before U.S. President Barack Obama is due to visit the country.

In a separate case, journalist Reeyot Alemu, jailed in June 2011 after being found guilty of plotting a terrorist act, was released on Thursday, campaigners said.

"They have suffered, their rights have been violated, but now we are happy," defense lawyer Ameha Mekonnen told AFP after the five journalists and bloggers were released on Wednesday.

Ameha said the decision to drop the charges was unexpected.

"We are all surprised. The question is why did it take more than one year? We've been crying, shouting to the court, to the government," he said.

The trial of the four remaining bloggers is due to resume on July 20.

Rights activists welcomed the releases but said more needed to be done.

"It's very good news that six journalists and bloggers have been released, though they shouldn't have been imprisoned in the first place," said Leslie Lefkow, deputy director for Africa at Human Rights Watch.

"The government should show this is only a first step toward releasing all political prisoners and opening up space for Ethiopians to voice dissent on a range of issues."

Tom Rhodes from the Committee to Protect Journalists (CPJ) called the release, "a welcome turn of events in Ethiopia, where the number of journalists in prison has steadily increased in recent years."

"We call on authorities to release the remaining Zone 9 bloggers and all the journalists in jail for their work, and to drop all charges against them," Rhodes said in a statement Thursday.

Reeyot Alemu, who won a U.N. press freedom prize in 2013, was originally sentenced to 14 years, reduced to five years on appeal.

The CPJ said that at least 12 other journalists were still incarcerated, most facing terrorism charges, making Ethiopia the second-worst jailer of journalists in Africa, after its oppressive neighbor Eritrea.

Ethiopia is an ally of the West in the fight against Islamist extremism in East Africa, receiving millions of dollars in foreign aid, but has a dire record when it comes to human rights and press freedom.

In elections in May the ruling Ethiopian People's Revolutionary Democratic Front (EPRDF) coalition, in power since the end of a civil war in 1991, and its allies won every seat in parliament.

Obama is due to visit Ethiopia later this month as part of an Africa tour that includes a trip to Kenya, where his father was born.

In Ethiopia, Obama is expected to meet Prime Minister Hailemariam Desalegn and address the African Union at its Addis Ababa headquarters.

Four other members of Zone 9, a blogging collective, remain in jail while one other was charged in absentia.

"For us, there is no difference between the five released and the four still in jail. For them the case continues and we are ready," said Ameha.