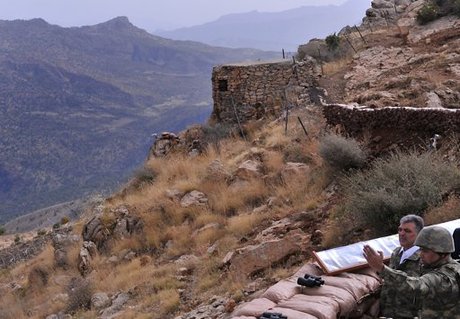 The Turkish army Tuesday denied that tanks crossed into Iraq, in a statement posted on its website.

"Today there were some media reports about our tanks crossing to the other side of the border. These reports are not correct," the army said.

"Our tank units held a military exercise east of Silopi within our borders and near the (Iraqi) border," it added.

Some 20 tanks and 30 military trucks entered Iraqi soil from Siyahkaya village around 15 kilometers east of the Habur gate on the Turkish side of the border, sources said.

However, on Tuesday Iraqi border guards and Kurdish rebels denied any Turkish incursion into Iraq, despite an eyewitness report that Turkish troops were moving through Iraq's northernmost province Tuesday.

"There has been no Turkish incursion by soldiers or Turkish forces onto Iraqi soil," said Colonel Hussein Tamer, head of the border guards for Dohuk along the border with Turkey.

Major General Ahmed Fadheleddin, who leads border guards in neighboring Arbil province, added: "Until now, there has been no incursion."

Arbil and Dohuk are the two provinces of Iraq's autonomous Kurdish region that share a border with Turkey.

"Turkish forces have not entered Kurdistan's soil," added Ahmed Denis, spokesman for the Kurdistan Workers' Party (PKK), which maintains bases in Iraq's Kurdish region and is the target of Turkish forces.

But Fawzi Ibrahim Mohammed, 50, who lives in the town of Uri in Dohuk province, said that Turkish forces entered the village on Tuesday morning.

The Turkish military launched air and land operations against the PKK after the separatist group's guerrillas killed 24 soldiers and wounded 18 along the Iraqi border last Wednesday, the army's biggest losses since 1993.

Some 10,000 troops on the ground were believed to be involved in Turkey's operations, backed by jets and helicopters, inside Turkey and across the border. Military officials did not say how many soldiers had entered Iraq.

The PKK, listed as a terrorist organization by Turkey and much of the international community, took up arms for Kurdish independence in southeastern Turkey in 1984, sparking a conflict that has claimed some 45,000 lives.