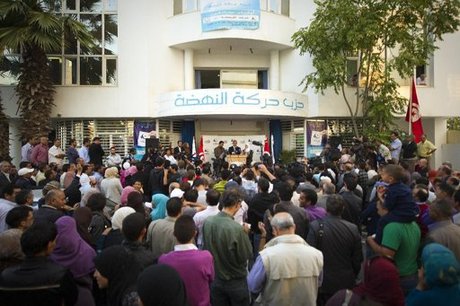 Ennahda took 15 of the 39 seats from five domestic polling districts in the new constitution-writing assembly, the ISIE elections body announced, stressing the provisional nature of the tally.

This meant Ennahda had taken 24 of the 57 seats accounted for so far in the 217-member assembly that will rewrite Tunisia's constitution and appoint a caretaker government.

There were 27 polling districts in total on Tunisian soil, and six abroad.

"We will publish the results piecemeal. The mechanisms of counting demand time," ISIE secretary general Boubaker Bethabet said in Tunis.

The provisional results for the eastern coastal cities of Sousse and Sfax, Tunisia's second city, as well as Jendouba in the northwest and Kebili, a desert town in the center, put the leftist Congress for the Republic (CPR) in second place with six seats.

It was followed by the Petition for Justice and Development, a list led by independent candidate Hachmi Haamdi, a rich London-based businessman, with five seats, and the leftist Ettakatol with four.

The Democratic Progressive Party (PDP) followed with two seats, as did The Initiative, a party founded by a former minister in the cabinet of Zine el Abidine Ben Ali who was ousted in a popular uprising in January.

Massive numbers of voters Sunday elected members of the new assembly that will have interim authority to write laws and pass budgets.

It will decide on the country's system of government and how to guarantee basic liberties, including women's rights, which many in Tunisia fear Ennahda would seek to diminish despite its assurances to the contrary.

Ennahda has already claimed to have taken the biggest block of votes, between 30 and 40 percent -- hailing the start of what is expected to be complicated negotiations for a majority coalition.

To form a majority, Ennahda will have to negotiate with the next biggest parties, all on the leftist, liberal side of the political spectrum.

CPR leader Moncef Marzouki has insisted that no firm agreement was made in pre-poll talks with Ennahda that saw other leftist parties accuse his party of seeking "a pact with the devil".

But he defended the need to form a broad alliance to strengthen the assembly and give the caretaker government "the means to govern".

For its part, Ettakatol had refused all pre-poll approaches while insisting on its intention to be part of a national unity government.

The center-left PDP party, tipped as Ennahda's main challenger before the vote, conceded defeat on Monday.

Analysts have told Agence France Presse that Ennahda, even in a majority alliance, would be unable to "dictate" its program to the assembly, having no choice but to appease its alliance partners, a moderate-minded society, and the international community on whose investment and tourism the country relies heavily.

Leftist parties may also seek to form a majority bloc against Ennahda.

The Modernist Democratic Pole, a grouping of five liberal parties, said Tuesday that no official coalition talks have started, but stressed it would seek an alliance of democratic parties.

Ennahda says it models itself on the ruling AKP party in Turkey, another Muslim-majority country which, like Tunisia to date, is a secular state.

But its critics accuse the party of preaching modernism in public and radicalism in the mosques.

Even before the official results, Ennahda has sought to reassure investors of stability, and women that it will respect their equality, and said it was open to a coalition with any party "without exception".

Ben Ali was toppled in an uprising that sparked region-wide revolts which claimed their latest Arab strongman last Thursday with the killing of Moammar Gadhafi of Libya.

Tunisia's electoral system was designed to include as many parties as possible in drafting the new constitution, expected to take a year, ahead of fresh national polls.

The current interim government will remain in power until the assembly appoints a new president, not expected before November 9.

About 100 Tunisians protested Tuesday outside the headquarters of the ISIE against "fraud" they claimed had marred the country's first-ever democratic vote.

"No, no to fraud," chanted the group of mainly young people, calling for a probe into the finances of parties like Ennahda, widely suspected of being propped up by Gulf countries despite a ban on foreign funding for parties contesting the election.

But the European Union observer mission declared itself "satisfied" with the conduct of the polls, which it said were transparent with only "minor irregularities".

Today, elections in Tunisia, tomorrow in Egypt and Libya and the day after in Yemen and Syria.

If Tunisia has polling stations for expatriates, then Lebanon must have them ready for the next elections....

bigdig is thankfully correct, we are witnessing the birth of the Islamic middle east the glorious Iranian leaders promised back in January. First Tunisia then Libya then Egypt then Syria and Iraq. It will be pure and holy and clean of any infidels or Islamic values. The bigcleanup began in earnest in Iraq and Egypt and will spread to the rest fulfilling the Iranian leadership's promise. We should all rejoice,

bigdig is thankfully correct, we are witnessing the birth of the Islamic middle east the glorious Iranian leaders promised back in January. First Tunisia then Libya then Egypt then Syria and Iraq. It will be pure and holy and clean of any infidels or non Islamic values. The bigcleanup began in earnest in Iraq and Egypt and will spread to the rest fulfilling the Iranian leadership's promise. We should all rejoice,

Sorry but i disagree to having polling stations abroad for expats to vote.

Yes i heard the case made by those who want it to happen, but the fact is there are tens of millions of Lebanese abroad, much more than here and therefore allowing them to vote would make the residents opinion marginal.

As a Lebanese living in Lebanon, I refuse to see my fate decided by people who do not live here, barely come a few weeks per year to party (if they come at all) and have a distorted, distant vision of our realities here. They would vote based on what they see on the TVs wherever they live, meaning it would give France 2, CNN, BBC or whatever the power to influence greatly the results of elections and the destiny of Lebanon

Well i hate to admit mowaten is right this time.
I believe in free will. If this is what Tunisia wants, let it be.
The islamists were the strong opposition to Ben Ali. The frustration votes went for them. The moderates were divided into tens of parties. Give it time...

@mowaten you should address your comments to bigdig who "shoved Iran" in his post, I was agreeing with him and quoting what the Iranian leaders said about the "Arab spring" back in January. Can't you see the word Iran without having a head rush and getting your panties in a bunch, why is everything you write dictated by a paint by numbers chart supplied by al-akhbar can't you ever think for yourself.