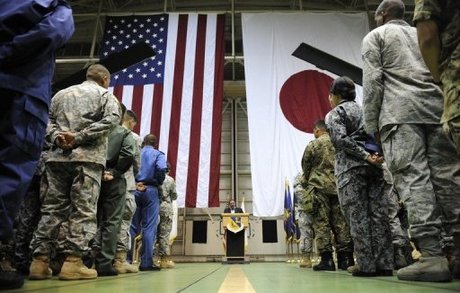 Panetta, on the last leg of an Asian tour which also took him to Indonesia and Japan, was to meet troops at the huge Yongsan U.S. army base in central Seoul later in the day.

U.S. forces have been based in the South since the end of the 1950-53 war with the North, with 28,500 currently stationed in the country.

The U.S. defense chief, in an article in Wednesday's Chosun Ilbo newspaper, reaffirmed the commitment to defend the South -- which accuses the North of two border attacks last year that cost a total of 50 lives.

"Working together, our militaries will continue to deter North Korean aggression, and stand prepared to defeat the North should it ever force war upon us," Panetta wrote.

"It is important to send this signal because North Korea remains a serious threat. Pyongyang has demonstrated its willingness to conduct provocations that target innocent lives."

The North also continued to defy the international community by bolstering its nuclear and missile capabilities, he said in the article, which appeared a day after U.S. and North Korean negotiators met in Geneva to discuss a possible resumption of disarmament talks.

In addition, the U.S. "will ensure a strong and effective nuclear umbrella over the ROK (South Korea) so that Pyongyang never misjudges our will and capability to respond decisively to nuclear aggression".

Panetta during his three-day visit would stress U.S. and South Korean capability to deter provocations and to defeat the North if deterrence fails, a senior defense official traveling with the secretary told reporters.

He would also share views with his counterparts on the Geneva meeting.

Stephen Bosworth, outgoing U.S. special envoy on North Korea, described the talks as "very positive and generally constructive" but cautioned that not all differences could be quickly overcome.

The North formally quit the six-party forum in April 2009, a month before staging its second atomic weapons test.

It has since repeatedly said it wants to come back without preconditions to the negotiations grouping the two Koreas, the U.S., China, Russia and Japan.

Washington and its allies say Pyongyang must first take action to show its sincerity, such as shutting down a uranium enrichment plant that could be converted to make nuclear weapons.

The official said it was important to ensure that U.S. defense and security policy was aligned with the diplomatic process.

"Our experience is that our North Korean friends go through cycles of diplomatic engagement and provocation. We need to be prepared for how that cycle may play itself out in the next turn."