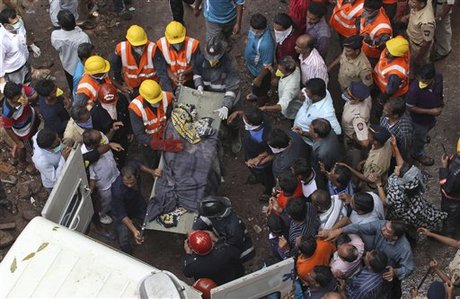 Seven people died when a three-story building collapsed in heavy rains in western India, an official said Wednesday, the latest deadly accident to highlight shoddy construction standards in the country.

Rescuers were frantically searching for another three people believed trapped under the rubble of the dilapidated building, which crumbled on the outskirts of Indian's financial capital Mumbai late Tuesday night.

The building was situated in the Mumbai suburb of Thakurli, in the Thane district of Maharashtra state.

"It was an old structure that had been declared unsafe, yet four or five families continued to reside there," Avasthy said, adding that monsoon rains were hampering the relief effort.

"The weather is being adverse and we are still to go through nearly one fourth of the site so we can't say how much more time will be needed.

"Only once we are sure all who can be saved are out then will we take a call on ending the operations," he said.

Millions in India live in dilapidated old buildings, many of which cave in during rain.

The accident is the latest in a long line of deadly building collapses recently, some of which have highlighted poor construction standards.

This month, five people died when an old four-story block fell in the capital New Delhi.

In February, a newly-built house in the northern state of Uttar Pradesh collapsed and killed 13 people as they slept.