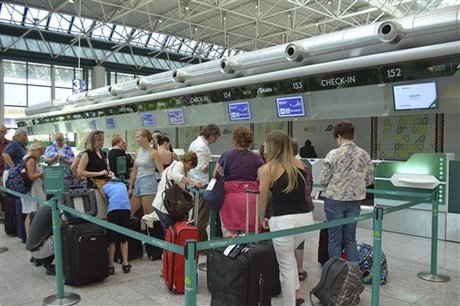 Rome's Fiumicino airport briefly suspended all flights Wednesday after a fire broke out in a nearby pine grove, spreading dense smoke across the runway.

The Italian Civil Aviation Authority said the situation was "slowly returning to normal" as firefighters battled to extinguish the blaze.

Clouds of grey smoke blown by strong winds over the runways had temporarily grounded all flights at the capital city's biggest airport, which was forced to close in May after a blaze devastated part of a terminal and had yet to fully reopen.

"Due to a fire outside Rome #Fiumicino airport all departures are suspended," Alitalia said on Twitter, while airport authorities added that arrivals were also being affected.

Teams of firefighters were tackling the fire in a pine grove in Focene, next to the airport, which appeared to have been started on purpose and had spread to engulf several vehicles in a nearby carpark.

"The situation is very serious, the blaze is about one kilometer (about half a mile) wide," said Fiumicino mayor Esterino Montino.

"The fire seems to have started in two or three different places. It's difficult to intervene because the wind is blowing towards the pine grove."