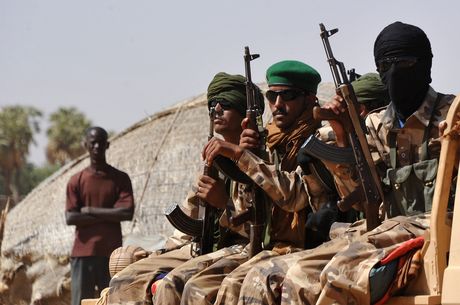 At least 10 soldiers were killed Monday in a "terrorist" attack on their camp in northern Mali's Timbuktu region, military sources said.

"This morning at Gourma-Rharous we pushed back a terrorist attack which caused 10 deaths in our ranks," the source said.

Another military source confirmed the ambush, saying it had targeted a unit of the National Guard based in Gourma-Rharous and left around 10 men dead.

The second source said the attackers were believed to be "jihadist elements" linked to Islamist group Ansar Dine.

The attack comes two days after two Malian soldiers were killed and four others injured in an ambush in the center of the west African country.

Jihadist attacks have long been concentrated in Mali's north, but began spreading at the beginning of the year to the center of the country, and in June to the south near the borders with Ivory Coast and Burkina Faso.

The north came under the control of Ansar Dine -- which is Arabic for Defenders of Faith -- and two other jihadist groups, Al-Qaida in the Islamic Maghreb (AQIM) and the Movement for Oneness and Jihad in West Africa, in April 2012.

A move south towards the capital by the extremists, who imposed a brutal version of sharia law on inhabitants, prompted Mali's former colonial master France to intervene in January 2013, pounding their positions in the north.

While their organizational structure has been smashed, small pockets of armed Islamists managed to remain active, and continue to carry out occasional deadly attacks in the desert.

Monday's attack is Mali's second deadliest in a month, after six U.N. peacekeepers from Burkina Faso were killed at the beginning of July in an assault claimed by AQIM.