'No Breakthrough' at U.S. Talks with N. Korea 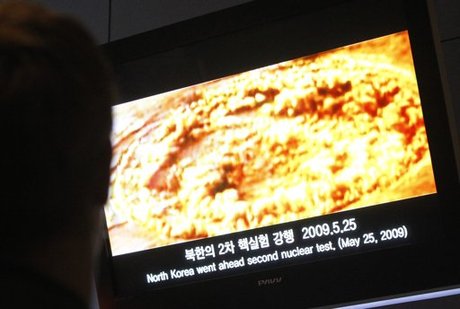 A senior U.S. official said Thursday there was some progress made but "no breakthrough" at this week's meeting with North Korea aimed at restarting long-stalled nuclear disarmament talks.

U.S. Assistant Secretary of State Kurt Campbell was speaking after briefing South Korea about the talks in Geneva on Monday and Tuesday.

"I think it will be fair to say we did make some progress. There was no breakthrough. There is a substantial amount of work that needs to be done. No decisions have been taken about next steps," Campbell told journalists.

"We clearly stated our position on pre-steps," he said without elaborating.

The North formally quit the six-party nuclear talks in April 2009, a month before staging its second atomic weapons test.

It has since repeatedly said it wants to come back without preconditions to the negotiations, which group the two Koreas, the U.S., China, Russia and Japan.

Washington and its allies say Pyongyang must first take steps to show its sincerity, such as shutting down a uranium enrichment plant that could be converted to make nuclear weapons.

"Both sides decided to further... contacts and talks to discuss and solve the pending issues in the light of building confidence," a foreign ministry spokesman told Pyongyang's official news agency.

However, the spokesman reiterated that the full six-nation nuclear negotiations should restart without any preconditions.

Campbell, who is wrapping up an Asian trip that took him to Indonesia and the Philippines, arrived in Seoul early Thursday for a stopover to meet Deputy Foreign Minister Kim Jae-Shin.

"One of the reasons that we are here is to begin the process of deep discussions with South Korea so that we can plot our course going forward (on nuclear issues)," he said.

Campbell said that the U.S. side in Geneva stressed the need for the North to engage in dialogue with the South.

Campbell and Kim also discussed next month's 18-nation East Asia Summit in Bali, at which President Barack Obama will participate for the first time.

The United States will seek talks on bolstering international cooperation on maritime security at the summit, he said.

Campbell said he and Kim also discussed a possible collective response to regional disasters like the flooding in Thailand and Japan's nuclear crisis.

"There is enormous capacity in Asia for disaster response but it's poorly coordinated and we're seeking to take steps at the East Asia Summit to improve that capacity," he said.

The U.S. and South Korea would also work to ensure the summit makes "important progress" on non-proliferation, he said.