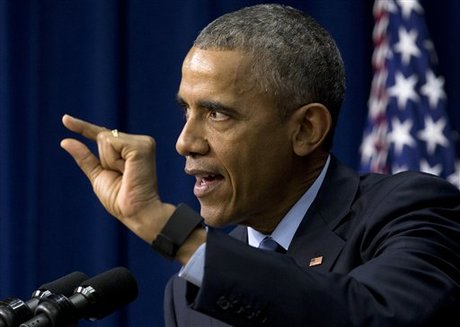 U.S. President Barack Obama believes Bashar Assad's backers in Moscow and Tehran may see the writing is on the wall for the Syrian regime, offering rare hope for a resolution to a bloody civil war.

Speaking to columnists in the White House on Wednesday to sell his nuclear deal with Iran, Obama also offered a glimmer of optimism about the dire situation in Syria.

"I do think the window has opened a crack for us to get a political resolution in Syria," Obama said, according to Robin Wright of the New Yorker, one of those present.

"Partly because both Russia and Iran, I think, recognize that the trend lines are not good for Assad. Neither of those patrons are particularly sentimental," he was quoted as saying.

"And that means, I think, the prospect of more serious discussions than we've had in the past."

Syria's brutal civil war is now in its fifth year and has claimed more than 240,000 lives.

Repeated diplomatic efforts to resolve the conflict have failed in the early stages.

But in a sign that global powers may be edging closer to ending the divisions that have fueled the war, the United Nations Security Council on Friday unanimously adopted a resolution on the subject.

The U.S.-drafted resolution sets up a panel to identify who is behind deadly chlorine gas attacks in Syria that the West blames on the Damascus regime.

Russia, Syria's veto-wielding ally, endorsed the measure as did the rest of the 15-member council -- a rare display of unity over how to address the conflict.

But both Obama's tempered optimism and the resolution stop well short of sketching an end to a conflict that has destabilized the entire Middle East.

"How to execute an actual transition is very difficult," Obama warned.

What began as an uprising against the Assad regime has metastasized into a sectarian conflict with an array of militia belligerents and networks of alliances that baffle even experts.

"The strongest opposition forces on the ground are vicious terrorist organizations that are constantly merging and blending with people who just want to get the yoke of an oppressive regime off their backs," said Obama.

"Being able to sort through what a representative government would look like—one that would give Sunnis inside of Syria a sense of their rightful place at the table, while preserving protections for Alawite and Druze and Christians after so much bloodshed—is going to be tough."

He also noted that even if Iran and Russia may see Assad's shortcomings, it "doesn’t necessarily mean that Assad recognizes his weaknesses."

According to the New Yorker, the U.S. president warned against expecting a breakthrough anytime soon, but noted: "I think the conversations are more serious now than they might have been earlier."