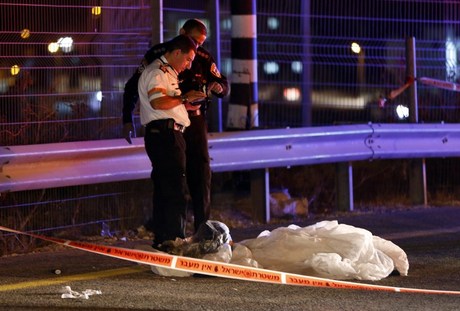 "In a stabbing attack at a gas station... between Jerusalem and Tel Aviv, one civilian was wounded and a suspect shot and wounded by soldiers," an army statement in English said.

Police said that the alleged assailant, a Palestinian from the nearby village of Khirbet al-Misbah, died of a leg wound shortly after the attack.

They said in a statement that the stabbing victim, a Jewish Israeli, was wounded in the shoulder.

The petrol station where the incident took place is on the busy highway 443, southwest of Ramallah, a major artery between Jerusalem and Tel Aviv, which cuts through the West Bank for several kilometers miles.

Public radio said the Israeli was stabbed while filling his car.

In a later statement the army said it believed another three assailants may have been involved in the attack and troops were scouring the area.

The attack took place as tensions in the West Bank soared in the wake of the deadly firebombing of a Palestinian home, attributed to Jewish extremists.

An 18-month-old boy was killed in the July 31 arson attack in the West Bank village of Duma and his father died in hospital Saturday from horrific burns over 80 percent of his body.