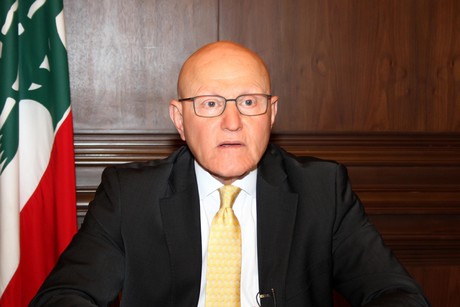 “Each day has its own events,” the sources said. “Salam is not alone responsible for confrontation.”

“All the government's factions are obligated to unite,” they said, adding “there is consensus on confrontation.”

Aoun called on Saturday on his supporters to get ready to stage demonstrations after Defense Minister Samir Moqbel issued decrees to extend the terms of the military commander, the chief of staff and the head of the Higher Defense Council.

Aoun rejects the extensions because he wants to bring his son-in-law Brig. Gen. Chamel Roukoz, who is the Commando Regiment chief, as army chief.

The prime minister is not changing his plans over Aoun's warnings, the sources stated in remarks to several newspapers.

He will travel to Jordan on Wednesday to head Lebanon's delegation to the yearly meetings of the Higher Lebanese-Jordanian Council and is scheduled to meet with King Abdullah II.

Salam is expected to return to Beirut on Wednesday night to chair the cabinet session the next day.

The sources also denied that the prime minister has made a pledge to Hizbullah not to take any decision during the session to provoke Aoun's representatives in the cabinet.

“The prime minister has never and will never provoke anyone,” they said. “He takes patriotic decisions.”

The sources added that Salam is working on consensus on condition that it does not paralyze the work of the government and the people's interests.

They stressed that the PM will reject any formula that leads to paralysis.

At one stage most of the Lebanese people will realize that the Caporal is mentally disequilibrated...

Very mentally ill....and you want him for president???