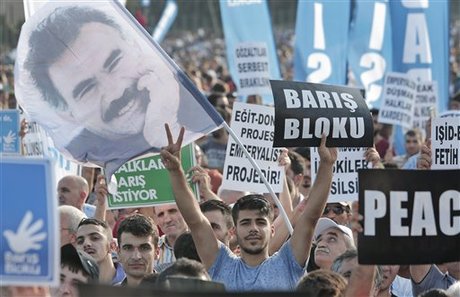 With a ceasefire between Turkey and Kurdistan Workers' Party (PKK) militants in tatters, the man who could hold the key to restarting the peace process is sidelined and increasingly isolated on a heavily fortified prison island.

Abdullah Ocalan, the iconic leader of the PKK, has only the most limited access to the outside world from his top security jail on the island of Imrali on the Sea of Marmara following his sensational arrest by Turkish agents in Kenya in 1999.

Crucially, the Turkish government has not given permission for a delegation of pro-Kurdish lawmakers to visit him since April, cutting off Ocalan's main means of communication with the outside.

Ocalan, 66, known as "Apo" or uncle to Kurds, was once the nemesis of the Turkish state but in March 2013 announced a PKK ceasefire after months of clandestine talks with Turkey's secret services.

The ceasefire disintegrated in July with Ankara launching a two-pronged "anti-terror" offensive against Islamic State (IS) jihadists in Syria and PKK militants in northern Iraq and the southeast of Turkey.

But so far, the air strikes have overwhelmingly concentrated on the Kurdish rebels, who have responded by waging a bloody campaign against the security forces.

Idris Baluken, a lawmaker from pro-Kurdish People's Democracy Party (HDP), told AFP that reviving the peace talks hinges on bolstering Ocalan's ability to negotiate and communicate with all parties concerned.

"It's not possible to talk about a fair negotiation process with the state with all its propaganda tools on one side and Ocalan in total isolation on the other side," said Baluken, who has been part of the HDP delegation that visited Ocalan.

Meetings with Ocalan, which last three hours, take place inside the compound under the watchful eye of three Turkish officials, Baluken revealed.

Baluken, himself a doctor, said Ocalan has a chronic allergy disorder that needs to be treated by a specialized doctor as opposed to the general practitioner currently on duty on the island.

"The government says he is OK but how can we know they're not lying? We need to see him," he said.

Ocalan, who has published 15 books since being incarcerated, spends his days reading academic works and books in his two-room, 12-square-meter (129-square-foot) cell.

He has a radio tuned in to Turkey's state-run TRT station and a television set with 12 mainstream channels.

For five hours a week, he is allowed to mingle and play sports with the compound's five other inmates.

The European Court of Human Rights last year condemned Turkey over its "inhuman" treatment of Ocalan.

President Recep Tayyip Erdogan responded by saying that "what needs to be done has been done" to improve the living conditions of Ocalan and said: "We would not provide (Ocalan) with a villa."

"The government has not allowed HDP delegations to visit Ocalan in prison since April. This has weakened Ocalan's power over the organization," she said in a briefing note.

Turkey last heard Ocalan's actual voice in 1999, during his trial on Imrali when he was sentenced to death in a verdict commuted to life imprisonment in 2002.

"For peace and brotherhood, I am ready to serve the Turkish state, and I believe that for this end I must remain alive," he said.

There had been talk on pro-PKK outlets that Ocalan was ill, being tortured or even killed, inflaming tensions between Turkey and the Kurds even before the current violence began.

Justice Minister Kenan Ipek in late July issued an official denial of Internet rumors that Ocalan was dead, saying the speculation had been made up "with specific" objectives.

Gareth Jenkins, non-resident senior fellow at the Central Asia-Caucasus Institute and the Silk Road Studies Program, said if Ocalan could make a statement it would be to call for a ceasefire.

"There is no doubt Ocalan will call for a ceasefire again because he knows his only chance of getting out of prison is there are negotiations and there is a ceasefire," he said.

Jenkins said that it would be a "security nightmare" if Ocalan is released or put under house arrest one day as some Kurds demanded, saying he would most likely always be kept on Imrali.

"If he was able to express his views more openly, say appear on TV, and people are listening to him, that would be enough for him," he said.