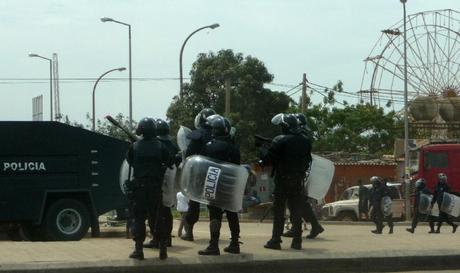 "Some of the methods the Angolan regime uses are reminiscent of what the apartheid regime used here in South Africa against the majority of the people," Marques told AFP in an interview in Johannesburg.

"It's reminiscent of the old tactics the fascist Portuguese colonial regime used against the former colonial subjects," added the outspoken 43-year-old, who was a guest speaker at the South African launch of a new book on Angola.

Marques, Angola's most prominent human rights activist and journalist, was convicted earlier this year of defaming military generals in a book about violence in the country's diamond mining industry.

International rights groups say activists and journalists are increasingly being targeted by the regime of President Jose Eduardo dos Santos, who has been in power since 1979.

Fifty groups including Human Rights Watch and Amnesty International wrote to the president in May decrying the charges against Marques, who was handed a six-month suspended jail term.

"This case reflects a broader deterioration in the environment for freedom of expression in Angola, including the increasing use of criminal defamation lawsuits against journalists and routine police abuse" of protesters, they wrote.

Last week, Marques said police violently suppressed a protest demanding the release of 15 opposition activists who were arrested in June and charged with planning to attack and oust Dos Santos.

The protesters, numbering around 50, were "mostly mothers and relatives of these political prisoners," said Marques, who was briefly detained at the event and had his camera confiscated by police.

"As these women were being beaten by the police, some fell, and the police would unleash the dogs on them."

The Oxford-educated activist said Dos Santos' regime had reached "a new low" in trying to suppress freedom of speech.

"Even within the regime, beating up mothers was inconceivable," he said, adding: "The ruling elite hates its own people."

After emerging from a brutal 27-year civil war in 2002, Angola's huge oil supplies have fueled a staggering ten-fold growth in the economy in the past decade.

But the recent slump in global oil prices has spelt disaster for the country, which faces elections in two years.

"In 2017, if the oil prices remain down, this regime will face the greatest challenge of its life in power, because the discontent will only grow," Marques said.

"And as the regime also seeks to repress more to maintain its grip on power, that, in the end, will backfire," he predicted.

Angola's huge oil revenues have failed to trickle down to most of its 24.3 million citizens -- half of whom live on less than $2 a day -- while turning a select few in the political elite into billionaires.

And Marques believes that the government's increasingly repressive approach is a response to Angola's changing economic fortunes.

"We are now at a crossroads whereby there is a serious economic crisis," he said.

"Now the government is trying to mitigate the economic crisis by increasing repression, because for many years what worked in Angola was a policy of carrot-and-stick ... but nowadays what government has been left with is the stick. So we are seeing an increase in political violence."