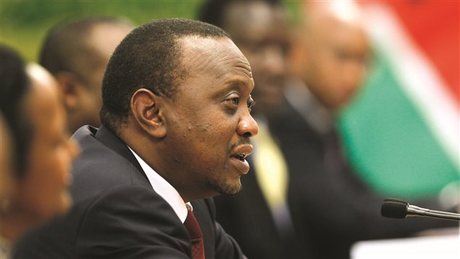 The International Criminal Court on Wednesday told judges to review their decision not to refer Kenya to the court's oversight body for failing to cooperate in the case against President Uhuru Kenyatta.

Prosecutors in late 2013 asked the Hague-based ICC to rule that Nairobi failed to act on a prosecution request to hand over Kenyatta's financial records, phone statements and other documents they said could prove their crimes against humanity case against the president.

The prosecutors also asked the ICC to refer the matter to the Assembly of States Parties (ASP), the court's 123-country legislative and oversight body.

The case against Kenyatta collapsed late last year after ICC chief prosecutor Fatou Bensouda withdrew charges accusing him of masterminding deadly post-election violence in 2007-08 in which more than 1,000 people died.

Bensouda blamed Nairobi for the collapse, saying she had "persistently sought to secure cooperation that my office required from the government of Kenya in this case in order to execute my mandate."

The ICC ruled in December that even though Kenya had indeed not cooperated with prosecutors, it did not "consider it appropriate to make a referral of the matter to the ASP on this occasion," slapping down the prosecution's request.

Bensouda appealed and on Wednesday the request was granted, with appeals judge Silvia Fernandez de Gurmendi agreeing the trial judges made errors.

"The Appeals Chamber found that these errors prevented the Trial Chamber from making a conclusive determination on the existence of a failure to comply with a cooperation request," Gurmendi said.

It also "affected the Trial Chamber's decision not to refer the matter of Kenya's non-compliance to the ASP," she said.

"Based on the factors that the Appeals Chamber has identified today," it means that the judges will now have to review their decision, ICC spokesman Fadi El Abdallah told AFP.

A new decision by trial judges is expected in due course, he added.

Violence broke out after opposition chief Raila Odinga accused then president Mwai Kibaki of rigging his way to re-election.

What began as political riots quickly turned into ethnic killings of Kenyatta's Kikuyu tribe, who in turn launched reprisal attacks.