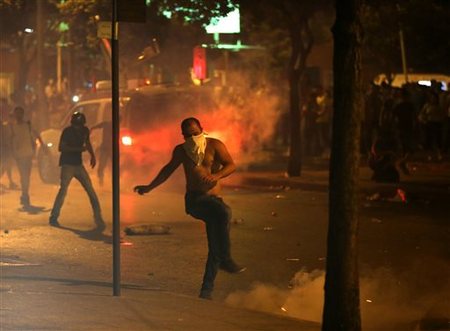 “Some media outlets have been claiming that Amal is involved in an attempt to stir strife and have accused the movement's members of seeking to stir riots to shove it in the latest events,” Amal's press office said in a statement.

Such accusations are “not true,” it said.

The statement accused the media outlets of lacking “professionalism and objectivity.”

The press office urged the media to inquire about any issue linked to the movement and warned them against “spreading lies.”

The statement added that Amal had the right to pursue them legally.

On Sunday, the “You Stink” online group and other protest organizers pulled their supporters out of downtown Beirut's Riad al-Solh Square and moved to the Martyrs' Square after men they described as political thugs began fighting with police.

The thugs, which some media reports said belonged to Amal, tried to tear down a barbed wire fence separating the crowds from the Grand Serail and threw molotov cocktails on security forces.

One of the protesters, who was seriously injured in the head, died early Monday.

lol you and your LF propaganda.

i dont delete comments barryless, i dont know if you're aware of that, but it's naharnet's moderators who do it.
as for your video, how hard is it to find 5 morons and pay them 20 rials each to chant such stupid chants?

Plus all this discussion is sterile, and it's irrelevant. what matters is that we dont want this rotten government anymore, and it has to go, period.
And if that's the best the m14/LF can do to divert the topic then you guys are really in deep s...

mowaten it would have earned you an ounce of credibility if you admitted that your people could do something like this and condemned it. But you had to deny it and come up with this global conspiracy theory.
Face it, you people are exactly what this video shows.

i disagree it is very relevant. The article is "Amal Warns Media against 'Spreading Lies' on Involvement in Protest Violence"
The evidence shows otherwise.

if you want this government gone, why don't your ministers resign? lol

this does not qualify as evidence of anything, it's chimps on film chanting stupid chants, it's all it is. Who they really are and who sent them if anyone did is open to speculation.

I expect they will, with the rest of the government, but don't expect that they resign on their own while the true crooks stay cozy in their seats.

_mowaten_ hahahaha so you're the judge of relevance now!? roflmao

And the only one who resigned with proud from ministerial post from FPM was charbrl nahass.. Now go ask him what he thinks of aoun and the orange tribe...
Down with all this political class, the corrupted ones and the ones witnessing the corruption and doing nothing to change it....

sorry to disappoint you flamethrower, but the FPM did not resign from the government in 2005 for one simple reason : They were not in it to begin with;))
https://en.wikipedia.org/wiki/Lebanese_government_of_July_2005

pb; mowaten is paid to represent his employer; hezbollah. He is paid to deny anything and everything that reflects badly on them. It is his job even though the facts stare him in the eye. If your looking for logic, you will not find it with him.

@Call z boys, i suggest that u review the list of the orange tribe members before making stupid coments like u just did....

Pijama boy, please stop sectarian coments, hachem salman was a shiite, beatten and killed in daylight by hezbos milicia man (or even...
There are decent patriotic shia like there is idiot christian sunny and druze...
Don't react as any of those retards will do...

kudos for pointing that out mowaten, it's good to see that not all hezbollah secular supporters embrace those trolls and their filthy language.

The Political thugs hijacked the demonstration the same as mowaten hijacked the Lebanese flag in his avatar (cover up unpatriotic deeds).

@mowaten E-X-C-E-L-L-E-N-T. Still laughing since the day you declared with a straight face you were a shiaa atheist and also a member of hezbollah with only one account. I think i will also continue to laugh at your statement "lol you and your LF propaganda ". Thank you Thank you

@mowaten E-X-C-E-L-L-E-N-T. Still laughing since the day you declared with a straight face you were a shiaa atheist and also a member of hezbollah with only one account. I think i will also continue to laugh at your statement " lol you and your LF propaganda.,". Thank you Thank you

It was obvious who was behind the violence: we witnessed it live on TV and no need for pictures. People were demonstrating against failure to resolve the waste issue and ended up calling for re writing the constitution;) Aoun and Hezbollah are destroying the little left of what was once a state.

What you, and ALL Lebanese need to do is blame ALL politicians for the failure of this state with no exceptions. Once your convictions are aligned to this fact, only then will Lebanon become a true civilized, progressive state. For decades, Lebanese have been killing eachother and pointing fingers at eachother with blind support to their militias/factions/party leaders. This is exactly what the mafia (political leaders) want you to do so they can continue to rape and pillage the resources of this great country. Lebanon needs qualified leaders to run the country but with the mass exodus of educated citizens bolting from the country as soon as they graduate university, only the blind sheep remain to ignorantly follow their factional leaders to their demise. WAKE UP LEBANON!!!

the LF carry the 'sword of Ali too'? hahaha!

southern, please go post on Manar and spare us your propaganda!

Southern please stop this hypocrisy, yes most of them were amal and started it early afternoon, u defend amal even when they are sent to blow up this kind if demonstration, this demonstrartion wich is not politized, in wich banner were against all our corrupt politicians including LF aoun.... So stop the crap, try to be patriotic for once...
Again difference between supporting patriotic resistance front and ISLAMiC resistance of our lical sectarian millicia...
Down with all of them, the corrupts and those closing their eyes on corruption..

The specialty of these Ebola followers is to lie...all the time.
Lebanon cannot co-exist with Ebola.

Check the Tattoos and all accessories...

I think u didnot watch the demos yesterday the message was clear aoun and all the others out, those guys were more that all the guys who took of the street upon aoun call, the guys yesterday (except those sent by amal to make it look bad) those ashraf menn ashraff el nass li lehe2on hadertak...
Ahet enta wou aoun wou ur sectarian millicia wou amal wou saad wou kell el taba2a el hakmeh..
All those in power now should quit because they have put us in the situation we are in or because they simply let the others put us in it....
Tel3et rihtak southern...

I donno why naharner keep dwleting my posts anyway thank you for freedom of speach dear moderator i'm sure gebran would be so proud...
But again southern, untill ur amal guys came and tried to ruin all effort of the mass protest the banner were clear; no to aoun amal hezbos jumbi saad .. Or any other corrupt "politician" or even non corrupted ones because they have let the others put us in this situation..
They were much more that the few oranges who took the street a week ago after aoun speech "al nafir..." :)
Ahet u and ur sectarian millicia southern, u and all the political class u are defending and this time not against political opponents but against demonstrator who want a real change, u are just another hypochrit...
Tel3et rihtak southern...

The thugs were not trying to "topple the cabinet" by breaking into the serail, they were trying to make the protest look bad. the protest which wants the cabinet to resign, that cabinet your mafia war criminal supports.
Breaking into the serail wouldn't accomplish anything anyway, it's just an empty shell, but believe me if HA wanted to break into it they would have been through in less than 5 minutes.

but zabadani is taking a bit longer than 5 minutes, do you know why?

mowaten, kudos as usual for pointing out 7amoodette , it's good to see that not all hezbollah secular supporters embrace those trolls and their filthy language.

Amal Warns Media against "Spreading Lies" on Involvement in Protest Violence.. and any Media organisation who does not heed this obvious treat will face the "consequences". Al-Jadeed TV once "spread lies" about Amal violent actions.. ONCE! "Fireworks" followed.
Oh and Wissam Alaaeddine and friends are already free and gas is cheap, so..

Here comes the zionist rethoric again...
The crowed expelled bou saab, the banners were against all the political class including aoun... So they were all Zionist to???
Another retard from the orange tribe....