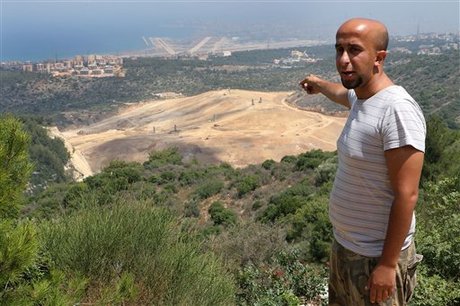 The municipality of Naameh that lies south of Beirut rejected outright on Friday the reopening of the landfill, saying it hoped that the issue won't be discussed by politicians.

“Our town suffered for 18 years from the dangers of the landfill and its negative health, environmental and social effects,” said a statement issued by the municipal council.

“The roads of our town, which has been a passage for garbage trucks, are in a very bad condition and require huge sums of money to fix them,” it said.

Given these conditions, “the town's council unanimously agreed to reject the reopening of the landfill even for a single hour,” the statement added.

The conferees hoped that Environment Minister Mohammed al-Mashnouq would not make such a proposal to resolve the country's growing waste crisis.

The Naameh landfill opened in 1997. It was meant to receive trash from Beirut and the heavily-populated Mount Lebanon area for only a few years until a comprehensive solution was devised.

But that plan never came to fruition, as efforts to pass waste legislation withered.

As 18 years ticked by, the valley that was originally expected to receive only two million tons of waste swelled into a trash mountain of over 15 million tons.

But the landfill was closed last month, causing a garbage crisis that led to anti-government street protests, which have turned violent.

On Tuesday, the cabinet failed to resolve the problem after it decided to reject a list of tenders for waste management contracts across Lebanon and refer the problem to a ministerial committee over their high costs.

I can not see houses next to the landfill? One area to be used is much better than the full land of Lebanon becoming waste Land of unsecured garbage!

The Gov & Sukleen must be held responsible for not starting since 20 years ago the proper process of garbage!

Question: does Junblatt own Naameh or its landfill and why does he have veto power or final say on whether the landfill opens or closes?