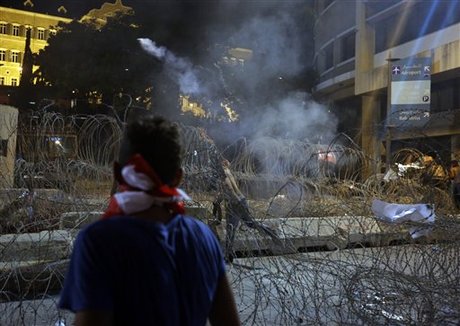 The Internal Security Forces said that investigations are underway with the detainees in connection with the rioting that erupted at the end of the peaceful rally.

They added that two of their members were slightly wounded in the scuffles.

The unrest broke out in Beirut's Riad al-Solh Square.

Earlier on Saturday, the “You Stink” civil society activists staged a huge protest against the current political deadlock in the country and officials' ongoing failure to resolve a waste management crisis that erupted in July.

The crisis started when the Naameh landfill was closed amid a failure to find an alternative which led to the piling up of garbage on streets throughout the country.

Thousands of protesters on Saturday demanded the resignation of Environment Minister Mohammed al-Mashnouq and called for holding Interior Minister Nouhad al-Mashnouq accountable for the use of force during a similar protest held a week ago.

They also called for the election of a new president.

They gave the government 72 hours to meet their demands, warning that after the deadline expires it will take escalatory measures not just in Beirut.

I wish they announce the names of the 10 arrested, and their political affiliation if applicable.

jaafar, ali, abbas, hussein, hassan, mousa, nawaf, and they all belong to hizballah.

Does the movement also demand that arms be in the hands of the Lebanese army and security personnel alone? It is useless otherwise.

Where are the 4 people missing from the 1st protest?
You must, we all must not let people fall though the cracks.
They might be dead and dumped out in the woods, or found in a shallow grave.
This is the work of Mashnouq, he acts like a Nazi!

But I want everyone to remain sober and wide awake, the politicians of both M14 and M8 are most unhappy about the youth movements which have clearly taken them by complete surprise, the old rot, M14 and M8 are now truly in panic mode. So my question, why was the cellular coverage, plus the 3/4G coverage cut off during the demo? Why was power also not provided? I remember very well, during the Cedar Revolution of 2005, Martyrs Square was always so well lit, almost like daytime, why the blackout now? Why was TV cut off, even if for a few minutes during the demos? People, stay wide awake, stay sober, we are facing the mafia and it's made up of both M14 and M8. In public they want the world to believe that they are enemies, but in the corridors they agree on everything against us, latest of which, the trash Mouna2asah, in which we caught them all red-handed. The battle won't be an easy one, but the real Tsunami has just begun.

phoenix1 though normally I am not impressed by your positions here it obvious that you are a making sense. I congratulate you for not falling for what appears to be obvious under the cover of darkness. One thing, the mafia, or mob , has centuries of experience They know that most people have a price and the Press offers itself like a whore, They will slaughter innocents to create sectarian strife in a heartbeat. Soon. Believe it.

@phoenix1. Yes, eyes open, but do not characterize the event as a "tsunami", which connotes an uncontrolled and uncontrollable event of nature. No, it is essential to maintain control WITH your eyes wide open.
The fact of the matter is that the government is so rotten that it will fall down with the slightest push. There is no issue to topple this government, the problem is with what comes next. Has it been thought out in detail to the last play, and is there a rational implementation plan to bring it about. The people are with you. They hope there is leadership in this Movement that has thought out the idea of real government and a real state. I like the picture you have chosen, Phoenix, as you identity. If only we had a Basher Gemayel now, this would be easier, hopefully, there is one among you to push your agenda, before one is pushed onto you.

10 arrest at nightfall when hundreds of thousands of people were protesting in daylight >>>> try not to be stupid, I know it hurts but I also know that you like , no, love it.

Thank you Beiruti, JCW thank you, all points noted, cheers.