EU Officials Meet in Calais as Europe Splinters over Migration 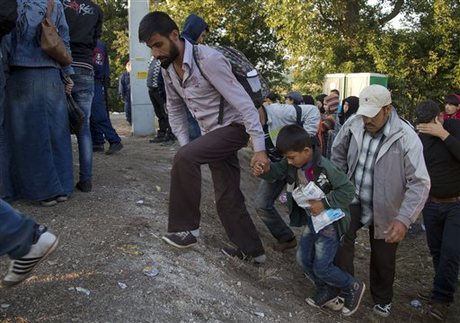 The French prime minister was set to meet EU officials in the refugee pinch point of Calais on Monday as increasingly urgent efforts to deal with migration into Europe exposed divisions across the continent.

France is expecting several million euros more in aid from Brussels, a government source said, to help deal with the thousands of migrants and refugees camped out in "The Jungle" around the northern port, hoping to reach Britain.

But Calais is only a footnote in the ever-growing efforts to manage the biggest movement of people since World War II, with more than 300,000 arriving in Europe this year thanks largely to a rash of conflicts in the Middle East.

"Europe is mobilizing," Manuel Valls said as he arrived in Calais, countering comments made Sunday by Italy's Prime Minister Matteo Renzi that "Europe needs to stop being moved and start moving".

Home affairs ministers will meet on September 14 in Brussels to try and "strengthen the European response".

But deep divisions have emerged among the EU's 28 members.

French Foreign Minister Laurent Fabius on Sunday said it was "scandalous" that some Eastern European countries were refusing to accept more migrants and added Hungary's construction of a barrier to stop new arrivals "did not respect Europe's common values".

The discovery last week of 71 decomposing corpses in an abandoned truck on an Austrian motorway once again highlighted the horrific dangers to which migrants and refugees are exposed, while some 2,500 have died trying to make the treacherous journey across the Mediterranean Sea in rickety boats.

Most migrants land in Italy or Greece, then try to head towards the wealthier countries of northern Europe, though many obstacles lie in their way.

"We can't afford this at all, and every step of the way we have to pay," Samar, 40, from Damascus, told AFP as she waited with her two teenage boys for hours in the sun at a filthy reception camp in Presevo, Serbia.

"We are in a labyrinth, going from queue to queue, and here in Serbia, the police are shouting at us like we are animals," she said, tears welling in her eyes.

Eastern Europe is struggling to cope. Macedonia declared a state of emergency two weeks ago.

The right-wing government in Hungary, which has seen 50,000 new arrivals this month, has responded controversially by laying NATO-standard razor wire along its border with Serbia, to be bolstered by a four-meter (13 feet) high fence, border guards and sniffer dogs, as well as stiffer penalties for those crossing without papers.

It said criticism by France's foreign minister was "shocking and groundless" and that it would summon a French embassy representative over the comments.

The fence is not proving much use in any case, with police saying that 3,080 migrants crossed over on Saturday, the second-highest daily total.

A Palestinian-Syrian woman, traveling with her four-year-old daughter and other relatives, was unfazed by Hungary's tough stance.

"I just don't care who detains me now, I've already seen the worst," she told AFP.

"We were detained by the (Kurdish) People's Protection Units, the Islamic State group and Al-Nusra Front as we traveled westwards towards Turkey. It's a miracle we survived all that."

British Interior Minister Theresa May ignored the plight of refugees in an article in the Sunday Times, focusing instead on how to reduce legal immigration from other EU countries.

"To say we should not control -- and, critically, reduce -- net migration is defeatist and wrong," she wrote.

Five people -- four Bulgarians and an Afghan -- have been arrested in Hungary over the lorry incident in neighboring Austria. Four have already pleaded innocent.

The truck, carrying Hungarian plates, was found with the decomposing bodies of 59 men, eight women, a toddler and three young boys, all thought to be Syrians.

Police said they may have been dead for up to two days before it was found by motorway maintenance workers with decomposing body fluids dripping from the vehicle.

A passer-by told Hungarian news portal Index.hu that he saw the truck's driver running away from the back doors in panic and being picked up in another car before speeding off.

Three Syrian children rescued with severe dehydration from another van packed with migrants were taken out of hospital by their parents on Friday and "vanished", most likely to Germany, Austrian police said.

"The van was driven by a Romanian and had Spanish number plates and arrived from Hungary," spokesman David Furtner told AFP Sunday, adding that while they have arrested 93 alleged people traffickers this year in Upper Austria state alone, most still escape.