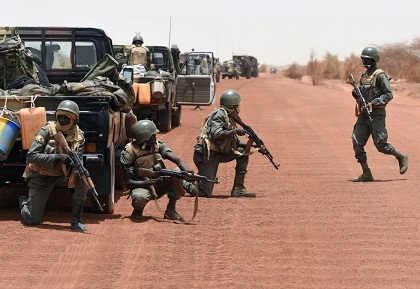 Two Malian soldiers were killed Tuesday in a pre-dawn attack against an army checkpoint outside Timbuktu in northern Mali, the defense ministry and a U.N. source told AFP.

"We lost two men this Tuesday at about 3am (0300 GMT) at our checkpoint north of Timbuktu," a defense ministry official said. The attack by unknown assailants was confirmed by a security source at MINUSMA, the U.N. mission in the country.

The ministry official said several soldiers had also been hurt in the "heavy arms" attack against the checkpoint and a Malian army vehicle hijacked.

The toll so far was "provisional", he said. "We will provide further details today on this criminal attack," he added.

The attack follows a deadly ambush on August 3 also in the Timbuktu region when 10 soldiers were killed in an attack on their camp at Gourma-Rharous by attackers believed to be jihadist fighters linked to Islamist group Ansar Dine.

Jihadist groups linked to Al-Qaida seized control of Mali's vast arid north from March 2012 until January 2013 when they were pushed back by forces from France, the country's former colonial master.

But parts of the remote north remain out of the control of the army or of the U.N. military mission as the country struggles to restore peace.

There were hopes of a return to stability in May when northern-based loyalist militias signed a peace deal with Tuareg rebels in the area, but the deal remains fragile.