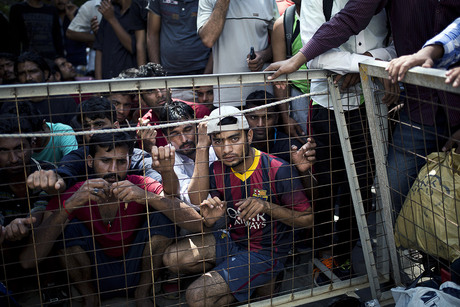 Thousands of refugees and migrants arrived in Athens on Wednesday, piling further pressure on increasingly divided European nations as they struggle to cope with the unprecedented influx.

Fresh protests also erupted in Hungary, a key transit point for the huge numbers of people trekking up from Greece through the Balkans in search of a new life in northern Europe.

Greece, on the frontline of the continent's biggest migration crisis since World War II, appealed for an "immediate" response from the EU and urged the United Nations to become involved.

Two government-chartered ships carrying some 4,300 people, many of them refugees from war-torn Syria, docked at Athens' Piraeus port after sailing from Lesbos, one of several Greek islands inundated by thousands of people crossing from Turkey in flimsy boats.

In Hungary -- a country that saw 50,000 migrants enter in August alone -- police blocked some 2,000 people from boarding trains from Budapest to Austria and Germany, triggering angry demonstrations at the main international railway station.

Another group staged a sit-in at a suburban station, refusing to board a train to a Hungarian refugee camp and demanding they be allowed to travel on to Germany, which as the EU's top economy is destination of choice for many.

"It's not our dream to stay here and to sleep in the streets."

More than 350,000 people have made the perilous journey across the Mediterranean this year, according to the International Organization for Migration, stoking friction in the 28-member EU over how to share the burden fairly.

Officials and analysts say the crisis is increasingly placing the continent's cherished system of borderless travel at risk, with German Chancellor Angela Merkel warning that the passport-free Schengen zone will be at risk if the EU cannot agree a common asylum policy.

Italian officials said they are ready to impose identification checks at Brennero on the border with Austria, after Germany requested help in easing the flow of migrants into its southern Bavaria region.

Police said migrants were arriving in Germany at a rate of 100 an hour early Wednesday, most of them pulling into the Bavarian capital Munich by train from Hungary via Austria.

Hungary allowed thousands to board the trains earlier this week, but in a U-turn on Tuesday police suddenly blocked access to the main station in Budapest for anyone without an EU visa. The government said it was simply applying EU rules.

Right-wing Prime Minister Viktor Orban's government has built a razor-wire barrier along Hungary's 175-kilometer (110-mile) border with Serbia, but it is proving ineffective at keeping the thousands of migrants out.

The Turkish coastguard said at least nine Syrians drowned on Wednesday when their boats sank on their way to the Greek island of Kos. Eight others were missing.

Off the Libyan coast, meanwhile, nearly 1,200 migrants were rescued by the Italian navy and two boats chartered by the charity Doctors Without Borders (MSF).

The cash-strapped Greek government has seen more than 160,000 people landing on its shores this year, and has repeatedly said it is unable to cope with the influx.

It announced a series of new measures to help deal with the crisis following a meeting of government ministers, including moves to speed up registration and a new "coordination unit" bringing the police together with staff from the interior and health ministries.

"The resolution of the migration crisis requires an immediate response from the EU, and it should even be raised at the U.N. level," said Ioannis Mouzalas, the deputy migration minister.

Greek officials are set to hold further talks Thursday with the European Commission's vice-president Frans Timmermans and Dimitris Avramopoulos, the EU's Migration and Home Affairs Commissioner, who are touring countries bearing the brunt of the crisis.

In France, Eurostar trains ground to a halt in the early hours of Wednesday as several people -- believed to be migrants -- climbed onto the tracks near the port of Calais, leaving hundreds of passengers stranded overnight in the dark and in stifling heat.

Several trains on their way to London or Paris had to turn back, and two trains were canceled to deal with the backlog of passengers.

Some 3,000 migrants are living in makeshift camps near the port and have ramped up their attempts to cross through the Channel Tunnel to England in recent months, with at least nine people killed.