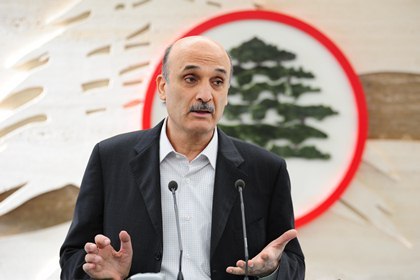 Lebanese Forces chief Samir Geagea announced on Saturday that the LF will not participate in a dialogue that Speaker Nabih Berri has called for to tackle Lebanon's controversial issues, describing it a “waste of time.”

“The dialogue will be similar to its predecessors. Consequently, it is a waste of time,” Geagea said about previous all party-talks held under former President Michel Suleiman.

“That's why we will not attend,” said the LF chief in a speech he gave following a yearly mass that he organizes in commemoration of the LF martyrs.

“One thing is required now – heading to parliament and electing a president,” he said.

Geagea stressed that holding the dialogue “would divert the attention from the single major step of … electing a president.”

His announcement came a day after Berri said he “would be glad” if Geagea decided to attend the talks.

The rival parties are expected to discuss on Sept. 9 ways to end the vacuum at Baabda Palace, the resumption of the work of parliament and the cabinet, a new electoral draft-law, legislation allowing Lebanese expats to obtain the nationality, administrative decentralization and ways to support the army and the Internal Security Forces.

Geagea said it was an “impossible assumption” that the conferees could agree on a presidential candidate.

“The stance of each side from the presidential elections is known. How could we reach a different result?” he asked.

“The dialogue will disregard our major problems, among them the waste crisis and the presidential elections,” he said.

Lebanon has been without a president since the expiry of Michel Suleiman's six-year term in May 2014.

The vacuum at Baabda Palace has paralyzed the parliament and the cabinet. The country's political problems worsened in July when a waste management crisis erupted following the closure of Lebanon's largest landfill in Naameh.

The government's failure to resolve the crisis has evolved into wider protests against the corrupt political class that has dominated Lebanon since the end of the country's civil war in 1990.

Geagea, who does not have representatives in the cabinet, slammed the government for failing to reach major decisions.

He said that 25 years after the end of the civil war, Lebanon is still suffering from water shortage, power cuts, bad infrastructure, bad services and now a waste crisis.

He said the only thing that the government's members agree on is the division of portfolios and shares.

“When all the parties want to unite in a single cabinet and at a time when many politicians are corrupt, everyone would want to keep pace with the other through corruption,” Geagea stated.

The LF chief agreed with protesters that the government should resign. “But on condition to form a new cabinet, which is neither ineffective, nor corrupt.”

The election of a president is the only way to change the government with a better one, he added.

Accusing Geagea of being salafist is a totally stupid comment.

Yeah for sure, how else is one going to collect the commissions for "solving problems" ;)

PS: Are you my father?

The only way forward for change are new parliamentary elections. Obviously Geagea doesn't want that because it may nix his chances of being elected president.

“The dialogue will be similar to its predecessors. Consequently, it is a waste of time,”

TRic trash
you are beyond delusional. By the way do you ever read your comments before you post them? if so do you understand them??

Tric Trac
You mean the Mecca where you were born?

“When all the parties want to unite in a single cabinet and at a time when many politicians are corrupt, everyone would want to keep pace with the other through corruption,” Geagea stated
.
who is the person that more promote the corruption in Lebanon...Hariri of Mecca! who want's Hariri to occupy the chair of the Presidence of Lebanon !!??...

Tric Trac
I think you are a better president than the Caporal.
Both of you are mad, but you are slightly better.

Tric, truly speaking, I've been praying hard for you, but it's obvious, you are beyond help.

Which Hiwar with a backward country???

OK. People of Ebola, you hate Geagea, and we hate the Caporal.
But the Caporal is a liar, corrupt, khadim to Ebola to Syria and Iran, traitor and mentally ill.

Okay let me follow Geagea's logic - we first head to parliament then vote...this parliament is legal but not legitimate. It can facilitate the election of a President but it cant be used to elect a President. If the MPs all gather to the parliament, what will happen ? Ghattas Khoury will be elected or Jean Obeid - all Mustakbal, Jumblat and Berri will unite and will vote for one of these candidates.

And do you expect the Christian to seat and applause ? Open your eyes, it will be the end of Lebanon

With the stubborness of FPM under the directions of HA I may agree with Geagea that this 9th of September meeting could be waste of time and a diversion from the main issue of electing a president.
However as mother of the child LF could have shown the good will to attend because the others may have learnt a lesson from "youStink" group. After the start of the meeting if conditions are still the same then LF can withdraw explaining why?
I know the goodwill of LF but الحق الكذاب لباب الدار
This is not the time to pull strings.

Heyyy you!! I think I know you! I used to tag along with General Fayez Karam and attend the meetings in Paris. General Michel Aoun insisted I submitted a reports to personally him about the minutes of the meetings and all the cash "donations" that you guys used to give us. In hindsight we sold our services real cheap, our current benefactors know how to tip!

He's a popper!! I should take you show you around my estates in Nakkash and Batroun, we'll use my helicopter or it'll take us a week LOL. I also have a little garçonnière in Qom, a "gift" from the Supreme Leader himself a thank you for the contracts to the Iranian companies in Batroun when I was energy and water minister. I might even fly you, in my private jet, to tour my penthouses in Geneva, Paris and villas in the US, Australia and Innsbruck Austria.. LOL I used to confuse the two all the time. Once I told the pilot fly us to Australia, It was January and I was in full sky gear, it was summer there! Obviously I should have said Austria.