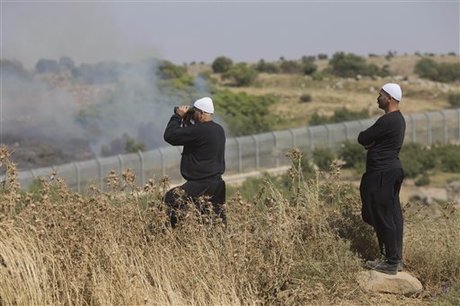 Progressive Socialist Party chief MP Walid Jumblat sought on Thursday to limit any possible tension that could emerge over the killing of Sheikh Wahid al-Balous, a prominent Druze cleric in Syria.

“This is not an opportunity to challenge anyone. We respect all viewpoints,” said Jumblat at the memorial service of al-Balous held at the Druze Community House in Beirut's Verdun district.

The Druze official, who supports the uprising against Syrian President Bashar Assad, said: “We have organized our differences with Hizbullah on the Syrian revolution.”

“We also understand Lebanese Democratic Party leader (MP) Talal Arslan's stance. We don't want tension to reach anyone or any side,” he told crowds gathered for the memorial service.

“We have our viewpoints and they have theirs,” he stated.

Both Hizbullah and Arslan, another Druze official, back Syrian President President Bashar Assad against rebels seeking to topple him.

Hizbullah has sent its fighters to Syria to help Assad.

His murder stirred angry protests by the cleric's supporters who accused the government of killing him.

Balous was a popular figure among the minority, which made up around five percent of Syria's pre-war population of 23 million.

He led Sweida's most powerful militia in battles against al-Nusra Front and the Islamic State group, but also opposed conscription of Druze men into the Syrian army's dwindling ranks.

Analysts said his death would likely benefit Syria's government, which was angered by his opposition to conscription and his desire to keep the Druze independent.

Jumblat also stressed in his short speech that “all the Syrian people will emerge victorious.”

Amazing our politicians are! Is al-balous a Lebanese citizen or leader to hold a memorial service for? He is Syrian and not Lebanese... Hezbollah buries a shia huthi leader on Lebanese soil in Dahieh. Then we talk about building a secular state. Hopeless!

Jumbo belongs to his community first...so are all the others...

Wow! Did Jumbo really said that???

Clearly assassinated by the Buthcher...and Co...