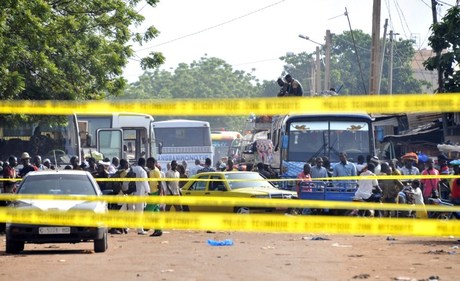 Islamists from a group linked to a deadly hotel siege have attacked a police post in central Mali, killing an officer, military and local government sources said Sunday.

"On Saturday, armed Islamists fired on three gendarmes in Bankass, at a security post," said a Malian army source in the regional capital Mopti, around 100 kilometers (60 miles) away, adding that one of the officers died.

Little is known about the extremist group, but it was linked to a hostage drama at a hotel in nearby town of Sevare in August in which 13 people died, including five U.N. workers.

Cisse said the fighters in Saturday's attack moved on after killing the police officer to a nearby local government building.

"There, they set fire to two vehicles and the residence of the sub-prefect, who fortunately was not there," he added.

"It was the men of Amadou Koufa of the Macina Liberation Front that did it."

Koufa is close to Souleyman Mohamed Kennen, who claimed responsibility for the Byblos hotel siege in a brief phone conversation soon after with AFP.

"The hand of Allah has guided the mujahedeen of Sevare against the enemies of Islam," Kennen said, adding that Koufa had given his "blessing" to the attack.

In 2012, Kennen was part of the Malian wing of fighters led by notorious Algerian jihadist commander Mokhtar Belmokhtar, a founding member of Al-Qaida in the Islamic Maghreb (AQIM), who now heads his own group.

Northern Mali was then under the control of jihadist movements linked to al-Qaida and ethnic Tuareg rebel forces. The main towns in the desert territory were recaptured from the extremists with the help of French and African troops in 2013.

Security forces in Mali have arrested at least 10 suspects over the Byblos hotel siege, which began on August 7 and lasted almost 24 hours.

Four foreign employees of the U.N.'s peacekeeping mission in Mali were killed, along with a Malian civilian driver, four "terrorists" and four soldiers, according to the government.

Army reinforcements arrived in the Bankass area on Sunday "to protect people and look for terrorists," the military source said.