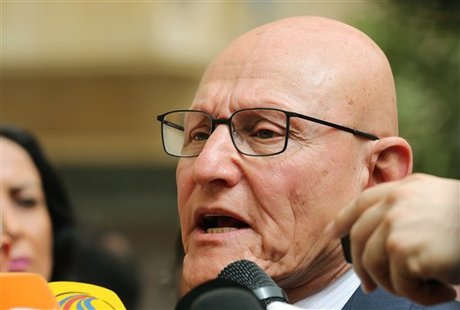 Prime Minister Tammam Salam has said that the demands of civil society on the country's waste crisis are “righteous” but he warned against attempts to create chaos.

The civil society protests are “righteous,” Salam told As Safir newspaper in remarks published on Monday. But the PM warned against “creating chaos and destruction as a result of some suspicious practices.”

He also warned protesters not to pave way for politicians to exploit their demands as a result of their deep rivalry. “This would lead the country towards destruction.”

“It is the right of the people to demonstrate as a result of bad management, corruption and division of shares,” he said. “The people should continue to call for their rightful demands and make their voices heard, particularly that the basic democratic aspects are missing.”

“There is a vacuum in the presidency, legislative work is paralyzed and the cabinet has stopped functioning,” Salam told As Safir.

The premier blamed all the political parties for the snowballing garbage crisis “as a result of their differences and their efforts to seek their political interests.”

The crisis erupted when Lebanon's largest landfill in the town of Naameh south of Beirut was closed in mid-July. Garbage began piling up on the streets of Beirut and Mount Lebanon, leading to demonstrations against the authorities.

Among civil society's demands is the resignation of Environment Minister Mohammed al-Mashnouq whom they accuse of failing to resolve the problem.

Al-Mashnouq has refused to resign but has withdrawn from a committee tasked with coming up with an appropriate waste management plan.

Agriculture Minister Akram Shehayyeb took over the file last week and proposed a plan to the government that approved it.

The plan, which calls for reopening the Naameh landfill for seven days to dump the garbage that accumulated in random sites, was rejected by civil society.

hello @humble
I am a friend of flamethrower and I post on his behalf whenever he asks me to. He asked me to ask you if you knew why he was banned and treated like a diseased leper?

May be he should go and get treated at a leprosis in Rabiyeh...

How would the "chaos" be worse than the current situation? Not sure it can get any worse, with that bunch of incompetents money is being spent all the time and nothing gets done, maybe without them the service level would be the same, but at least it would be free of charge.

do you call that a political analysis mowaten?

mowaten, I thought i told you I'd ring you when I needed a doorknob's opinion, who let you out of your cage?

I disowned him a longtime ago. He was always a problem child. We tried our best to raise him up as a Lebanese but he always aspired to be Iranian. I recall when he was a baby…. his first words out of his mouth were not Mama or Baba or Ughha …… but Aya-tollah ! He would wake up in the middle of the night and ask his mother when the Ayatollah would come take him to Qom. In the end, we surrendered to God’s will and accepted things as they were. Child psychologists informed us he will grow up to be the most sectarian creature. Well, it seems they were right.

@humble
did you know that you cannot be a syrian refugee and have a cellular phone and take selfies according to flamethrower. Instead you should stay in Syria and take the barrel bombs in stride. Only very poor people who do not own cellular phones should leave Syria and go become refugees in Europe.

FT, Karnatina, koleston_president , mowaten and I are the 5 most informative posters on naharnet by 5 country miles. No wonder our posts are always in the VIP section of the top rated comments.... No wonder.

To Whom It May Concern
I, the_roar, a well respected, heavily voted, liked, and admired shia poster (3rd generation Australian) on naharnet hereby declare that until further notice I suspend my membership in this forum similar to what MP Emile Rahmeh ( who got the highest votes in the last elections ) did when he suspended his membership in the Lebanese Parliament in SOLIDARITY with the unlawful, unjustified, and oppressive decision by the administration of this forum to ban my fellow shia poster Flamethrower.
Let it be know to all that such practices by management contradict with the basic fundamentals of the Iranian constitution and free speech in North Korea.
I remain,
Signed
the_roar

How is your collective rhetoric helping our tiny nation? It just doesn't.

As usual I know that my comment will be banned. However I will continue to express myself as a duty of free speech.
I strongly support Salam. I am sure he is working in the only benefit of the country and trust every step he does. I wish he stays firm taking decisions according to the majority.
Indeed consensus never existed even in the most civilized countries.
Consensus is expected in dictatorial system. Ruling by the majority is democratic, healthy and leads to improvement when thr pro and con parties race in the beneficial service of people to get its support.