Shehayyeb: Let Us Give the Waste Plan a Chance 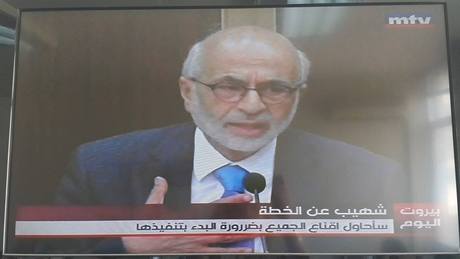 Agriculture Minister Akram Shehayyeb stressed on Monday that only partnership would guarantee the success of the committee tasked with resolving the two-month long waste crisis.

“Let's give it a chance before it's too late,” he told reporters in a press conference following the meeting of the Parliamentary Environment Committee.

“If it was not for the street mobility, the (waste management) plan would not have seen the light,” he said assuring that “the file cannot be delayed anymore because the consequences are not predictable.”

The Minister highlighted the people's fears that the temporary plan he set to solve the crisis could turn into a permanent one.

“It is an issue of trust. People fear that the temporary plans could become permanent, and their fears are righteous.

“They fear that political interferences could meddle here,” he stressed, but added that we cannot accept refusal for refusal sake.

Shehayyeb's plan to solve the two-month trash crisis calls for reopening the Naameh landfill, which was closed in mid-July, for seven days to dump the garbage that accumulated in random sites in Beirut and Mount Lebanon.

“The selected dumpsters will be turned into hygienic landfills,” assured Shehayyeb.

After he announced his plan last week, the civil society and local residents of Akkar, Naameh, Majdal Anjar, and Burj Hammoud protested against the step.

“If we fail to solve this file, then there is no need to look into any other issue in the country,” stated the Minister.

(1). In view of the impending disasters awaiting to happen with the start of the rains, this is indeed a time when I would join voices with minister Shehayeb and find a solution to the dire problem facing us. But quite naturally, it all rests on solid promises that for his plans to work, there should be a solid and firm signed covenant/promise by the government and concerned partners to make of this a temporary arrangement whilst concerned efforts are deployed in the interim period to put in place a durable solution to the trash problem. Furthermore, this is a collective effort by the entire citizenry, to change old habits and start anew, and the example and orientation should come from our authorities.

FT, Hashem.Al.Hussaini, Jalal.Al.Hussaini, thumbing.ministry, mowaten and I are the 6 most informative posters on naharnet by 6 country miles. No wonder our comments are always in the VIP section of the top rated comments..... No Wonder.

(2). Trash can be turned into huge profits for the state, but provided that corruption and graft are taken completely out of the equation. I see this as a golden opportunity by both administration and the people to be seized right on time, and to start afresh and avert an open confrontation between state and people, and instead, turning it into an evolutionary process of replacing a rotten system peacefully. But time is of the utmost essence, this is now the time of nationwide compromises, from the government, from the people and the site owners to accept that if none is done, then come the rains and Lebanon will wish it compromised when there was time to do so. let us not live in regret but in due action to avert the worst.

Shehayyeb: Let Us Give the Waste Plan a Chance

it's just like saying : "Let Us Give Nassrallah a Chance"

Here is an even better one:
1 hour ago National News Agency: State Security agents arrested the Syrian A. D. in Shebaa on charges of fighting alongside fundamentalist groups.

Nouh Zaiter is the best example of ashraf al nass that represents the "clean" resistance.

did you notice the ammunition magazine box the thug is using has Hebrew language written all over it? It is the second photo in the link you provided;)

Here is a funny one:

13 minutes ago A sit-in got underway on the airport road to express rejection of any attempt to bury late SLA leader Antoine Lahad in Lebanon.

The spiritual leader of the terrorist Huthis who is a Yemeni gets buried in Rawdat Al Shahidayyn in Dahia on supposedly Lebanese soil.

Why are people rejecting this plan...it is at least a proposal to resolve the immediate problem of trash accumulation in public places.